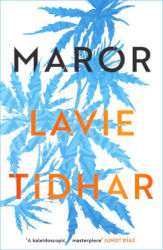 A multi-generational saga with cultural and political depth, drawing on the rich, often troubling recent history of Israel, for fans of A History of Seven Killings or The White Tiger.

How do you build a nation?

It takes statesmen and soldiers, farmers and factory workers, of course. But it also takes thieves, prostitutes and policemen.

Nation-building demands sacrifice. And one man knows exactly where those bodies are buried: Cohen, a man who loves his country. A reasonable man for unreasonable times.

A car bomb in the back streets of Tel Aviv. A diamond robbery in Haifa. Civil war in Lebanon. Rebel fighters in the Colombian jungle. A double murder in Los Angeles.

How do they all connect? Only Cohen knows.

Maror is the story of a war for a country's soul – a dazzling spread of narrative gunshots across four decades and three continents.

It is a true story. All of these things happened.

'Some write in ink, others in song, Tidhar writes in fire... Maror is a kaleidoscopic masterpiece, immense in its sympathies, alarming in its irreverences and altogether exhilarating' Junot Díaz

'One of the boldest, most visionary writers I've ever read creates both a vivid political exploration and a riveting crime epic. It's like the Jewish Godfather!' Silvia Moreno-Garcia