ARYA WINTERS AND THE CUPCAKES OF DOOM By Amita Murray 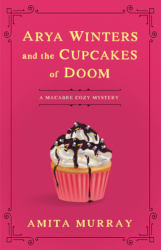 Arya Winters lives in a cottage in a small English village, and bakes for a living, specializing in macabre desserts. She has the standard nosy neighbors, whom she avoids ruthlessly due to profound social anxiety. She has a keen interest in all things sexy. And, oh, she also has a mild case of Tourette's. So very NOT your typical cozy heroine.

Publishers Weekly (Starred Review): "This superior cozy from Murray turns the genre on its head in this wryly witty and at times poignant outing."

ARYA WINTERS AND THE CUPCAKES OF DOOM

PRAISE FOR ARYA WINTERS AND THE TIRAMISU OF DEATH

Publishers Weekly (Starred Review): "This superior cozy from Murray turns the genre on its head in this wryly witty and at times poignant outing."

Library Journal: "Arya Winters, with all her anxiety, is an intriguing narrator."

Booklist: “A captivating blend of mystery and romance that explores themes of diversity and social dysfunction with subtlety and empathy but also with wacky, sometimes ribald humor. Offbeat, irreverent, funny, and boasting a broad, multifaceted plot, this one will appeal to fans who enjoy quirky, genre-defying reads.”

Arya isn’t one to take on residential gigs, but when she’s invited to bake her cakes for a two-week art retreat in the dead of winter on a large estate, she can hardly turn it down. Plus, she can get get away from her nosy neighbors. A posh estate, lots of baking, walks through the woods – what could go wrong?

Turns out Monk Hole is rife with secrets. Everywhere Arya turns, there are more people with problems, and they all want to talk to her. Could things get any worse? A corpse covered in her cupcakes might turns up perhaps. Then her ex, who seems to have a past she never knew about, makes an appearance – with a new girlfriend in tow. It’s all Arya can do to hold things together. Can she sort it all out before she loses all she holds dear?

Amita Murray is a writer based in London, by way of Delhi and California. Her first novel, The Trouble With Rose came out from Harper Collins in 2019; her short fiction has won the SI Leeds Literary Prize, and has appeared in Wasafiri, SAND Berlin, the Berkeley Fiction Review and others; her first novel for Agora – ARYA WINTERS AND THE TIRAMISU OF DEATH was critically acclaimed. She’s held writerly residencies with Leverhulme/University College London and Plymouth University/Literature Works, and has taught advanced fiction at the University of East Anglia and CityLit London.