RIKERS: An Oral History
by Graham Rayman and Reuven Blau 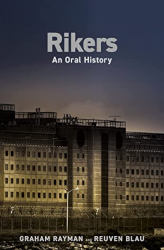 A gritty behind-the-scenes look into a secret world behind bars where a history of violence and death hangs in the air, where the city leaders mounted a grand experiment and watched it fail miserable, a remote place where society warehoused its problems and pretended they didn’t exist, a machine into which we fed generations of poor, largely black and Hispanic folks to perpetuate the institution without truly giving them a way out or up.

I know it is quite late as we are publishing in January, but just in case you have room and you’d like to consider, we this powerful work, we are happy to share material for RIKERS, a deeply reported and intense work by two New York City journalists. Rayman and Blau share first-hand accounts from wardens, medical staff, and current and former inmates of world renown Rikers Island, forming a tableau of what day-to-day life is like on the inside, not just for the inmates, but also everybody who enters the walls. America is famous for its isolated prisons, and now as there have been calls to close jails and reduce the number of incarcerated people grow louder, with the movement to close this entire island complex itself at the forefront, RIKERS tells a larger human story, it is a resounding lesson about the human consequences of the incarceration industry.

These are visceral stories of despair, brutality, resilience, humor, and hope, told by the people who were marooned on the island over the course of decades. The subjects each tell the story of their time at Rikers, from their first day on the island onwards, and they speak of experiences from the 1970s and '80s to the present day.

These oral stories are also entertaining and attention-grabbing — how the first loaded gun was smuggled into Rikers, how one guy escaped three times three different ways, the pork and beans lunch with real pigtails including hair in it, the red juice that stained the floor and made a great hair dye, how to make a deadly knife out of a ceiling light, why female correction officers sometimes get involved with inmates, the Rikers bus to nowhere, etc. People are going to want to read these stories for the stories themselves — to laugh, or gasp or be titillated or appalled.

Graham Rayman covers criminal justice and policing for the New York Daily News. He has won multiple journalism prizes over his thirty-year career. He has previously worked at New York Newsday, Newsday, and the Village Voice. He is also the author of The NYPD Tapes. Reuven Blau is a senior reporter at The City. He has previously worked at the New York Daily News, the New York Post, and the Chief-Leader. He is known as the dean of Rikers reporters.

Both Reuven and Graham spent many years covering Rikers in various ways, and have been developing sources and knowledge about the subject for just as long. They have reached into the past to pluck out these personal and compelling stories that not only shock or entertain or draw concern from the reader, but also tell the larger story: how, when given an opportunity to change a miserable history in penology, the government instead perpetuated it.

RIKERS will also feature twenty specially-commissioned black & white portraits of many of the subjects interviewed for this book.