BETRAYING THE NOBEL: The Secrets and Corruption Behind the Nobel Peace Prize
by Unni Turrettini 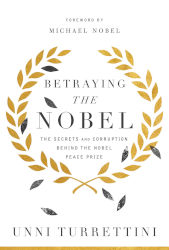 “Turrettini delves into the weird nebula of secrecy, dogma, politics, and pressure surrounding the Nobel Peace Prize. One might think the honor is unassailable…but Turrettini shows the controversial history of some of the prize winners (see: Yasser Arafat, Henry Kissinger, or Aung San Suu Kyi) as well as the many deviations from the construct that its creator, Alfred Nobel, envisioned. Intriguing and unforgettable.”

Full review: A complicated history of one of the world’s most prestigious honors.

Turrettini delves into the weird nebula of secrecy, dogma, politics, and pressure surrounding the Nobel Peace Prize, first awarded in 1901. Given the praiseworthy work of many of the laureates—e.g., Desmond Tutu, Martin Luther King Jr., Linus Pauling, Jane Addams, Elie Wiesel, and Mother Teresa—one might think the honor is unassailable. But the author shows the controversial history of some of the prize winners (see: Yasser Arafat, Henry Kissinger, or Aung San Suu Kyi) as well as the many deviations from the construct that its creator, Alfred Nobel, envisioned. Many still find it curious that Nobel was interested in awarding a prize for the amorphous concept of peace among other categories such as physics, chemistry, and medicine. Certainly, the awards have attracted much controversy, even in recent years—e.g., President Barack Obama’s 2009 award, given “in a hope for what he might accomplish.” The author, who is unafraid to point out the shortcomings of many of her subjects, admits that Nobel left significant flexibility for interpretation: The prize should go “to the person who shall have done the most or the best work for fraternity between nations, for the abolition or reduction of standing armies and for the holding and promotion of peace congresses.” In addition to examining some of the “tarnished” reputations involved with the prize, the author also explores the inherent sexism in the process—despite the fact that Nobel was influenced greatly by the peace activist Bertha von Suttner. Among the more intriguing tidbits: Five-time nominee Gandhi never won the award, and Hitler, Mussolini, Stalin, and Putin have all been nominees. Michael Nobel, the former chairman of the Nobel Family Society, provides the foreword, and the book also includes the text of Alfred Nobel’s will. A technically accurate, opinionated accounting of unforgettable winners and losers.

The Nobel Prize, regardless of category, has always been surrounded by politics, intrigue, and even scandal. But those pale in comparison to the Peace Prize, which remains the most prestigious, admired, and controversial prize of our time. Norwegian writer Unni Turrettini completely upends what we thought we knew about the Peace Prize— both its history and exactly how it is awarded.

*Interviews to coincide with the announcement of the 2020 Peace Prize

The will of the Swedish chemist, engineer, and industrialist Alfred Nobel established the five Nobel prizes in1895. The prizes in Chemistry, Literature, Peace, Physics, and Physiology or Medicine were first awarded in 1901. In the years surrounding World War I and II, the Nobel Peace Prize became a beacon of hope, and, through its peace champions, became a reference and an inspiration around the world. As 1984’ s winner, Desmond Tutu, put it, “I became an instant oracle.”

But along the way, something went wrong; the Peace Prize as we know it today is corrupt at its core.

Alfred Nobel made the mistake of leaving it to the Norwegian Parliament to elect the members of the Nobel Peace Prize committee, which has filled the committee with politicians more loyal to their party s agenda than to Nobel’ s prize's prerogative. As a result, winners are often a result of political expediency.

BETRAYING THE NOBEL, will delve into the surprising, and often corrupt, history of the prize, and examine what the committee hoped to obtain by its choices, including the now-infamously awarded Cordell Hull, as well as Henry Kissinger, Al Gore, and Barack Obama. Turrettini shows the effects of increased media attention, which has turned the Nobel into a popularity prize, and a controversial, trouble-provoking commendation.

Selecting winners who are clearly not peace champions creates distrust. So does lack of transparency in the selection process. As trust in leadership and governance reaches historic lows, the Nobel Peace Prize is a symbolic reference as to how we, as a society, are doing. The modern betrayal of the Nobel’ s spirit and intentions plays a key role in keeping societal dysfunctions alive.

But there is hope. BETRAYING THE NOBEL illustrates how the Nobel Peace Prize can again become a beacon of hope and honorable leadership. How the Prize can and should be a catalyst for change—and an inspiration for rest of us to become the peace champions our world needs.

Unni Turrettini was born in northern Norway and grew up in Drammen. She has law degrees from Norway, France, and the

United States and is the author of The Mystery of the Lone Wolf Killer (Pegasus Books), about Anders Behring Breivik. She lives in Geneva.