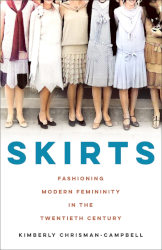 This sparkling social history traces the shifting roles of women over the twentieth century through the era’s most iconic and influential dresses, and explores how they paved the way for today’s modern fashion

While the story of women’s liberation has often been framed by the growing acceptance of pants over the twentieth century, it’s an inconvenient truth that women kept on wearing dresses long after pants were available to them. Suffragists and soldiers marched in skirts; Katherine G. Johnson helped send men to the moon in a skirt; Shirley Chisholm designed her own dresses to wear on Capitol Hill. As women made strides towards equality in the vote, the workforce, and the world at large, their wardrobes evolved with them. They did not need to "wear the pants" to be powerful or progressive; the dress itself became modern as designers like Mariano Fortuny, Coco Chanel, and Jean Patou redefined femininity for a new era.

Skirts looks at the history of womenswear, from the twentieth century to the present day, through the lens of game-changing dresses like the Little Black Dress and the Bar Suit, as well as more obscure innovations like the Taxi dress or the Popover dress, which came with a matching potholder. These influential garments illuminate the times in which they were first worn—and the women who wore them—while continuing to shape today’s contemporary fashion and even opening the door for a genderfluid future of skirts. At once an engaging social history and a delightfully entertaining romp through decades of fashion, Skirts charts the changing fortunes, freedoms, and aspirations of women themselves.

Dr. Kimberly Chrisman-Campbell is an award-winning fashion historian, curator, and journalist. She has worked as a consultant and educator for museums and universities around the world. She is the author of Fashion Victims: Dress at the Court of Louis XVI and Marie-Antoinette; Worn on This Day: The Clothes That Made History; and The Way We Wed: A Global History of Wedding Fashion. She is a frequent contributor to books, scholarly journals, and outlets including The Wall Street Journal, The Atlantic, Politico, NPR, the Biography Channel, and Reelz. She lives in Los Angeles. https://kimberlychrismancampbell.com/

Includes black & white photos. The book will also have a 8-page color insert.

We have a terrific new quote in for the book with former Editor in Chief of British Vogue, Alexandra Shulman saying: “A love letter to the many faceted qualities of the skirt and a fascinating look at how the skirt has changed—from who is wearing it to how it reflects the times we live in.”

“A love letter to the many faceted qualities of the skirt and a fascinating look at how the skirt has changed—from who is wearing it to how it reflects the times we live in.”—Alexandra Shulman, former editor-in-chief of British Vogue and bestselling author of Clothes and Other Things That Matter

“This spirited social history unpacks the power and politics of the dress with wit, substance, and style.”—Margot Mifflin, author of Looking for Miss America

“Smart and snappy...’the skirt’ is an overlooked part of our social, feminist history.”—Paulina Bren, author of The Barbizon: The Hotel That Set Women Free

“A must-read for anyone interested in fashion and sex.”—Vicky Tiel, fashion designer and author of It’s All About the Dress