PUTIN’S WARS: From Chechnya to Ukraine
by Dr Mark Galeotti 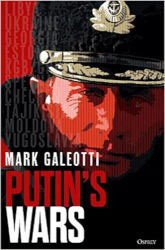 A timely and accessible history of how Putin and the conflicts he has chosen to involve Russia in has inexorably reshaped the country and her role on the world stage.

Putin's Wars is an accessible overview of the conflicts in which Russia has been involved since Vladimir Putin became president of Russia in 2012. But it also looks more broadly at his recreation of Russian military power and its expansion to include a range of new capabilities, from mercenaries to operatives in a relentless information war against Western powers. This is a engrossing strategic overview of a rejuvenated Russian military and the successes, and failures, on the battlefield designed to keep Russia front and centre on the world stage. Thanks to Dr Galeotti's wide-ranging contacts throughout Russia, it is also peppered with anecdotes of military life, personal snapshots of conflicts, and an extraordinary collection of first-hand accounts from serving and retired Russian officers.

Russia continues to dominate the news cycle throughout the Western world. There is no better time to understand how and why Putin has involved his armed forces in a variety of conflicts for over a decade. There is no author better placed to demystify the capabilities of the Russian military and give a glimpse into what the future may hold.

Putin's Wars is a lively and engaging history of a reawakened Russian bear and how it currently operates both at home and abroad to ensure Russia is front and centre on the world stage.

Previously he has been a Jean Monnet Fellowat the European University Institute, Head of the Centre forEuropean Security at the Institute of International RelationsPrague, Professor of Global Affairs at New York University,head of the History department at Keele University in the UK,an adviser at the British Foreign Office and a visitingprofessor at MGIMO (Moscow), Charles University (Prague) andRutgers (Newark), as well as a visiting fellow with theECFR.

His books include The Weaponisation ofEverything (Yale University Press, 2022), AShort History of Russia (HarperCollins, 2020/Ebury,2021), We Need To Talk About Putin (Ebury,2019) and The Vory: Russia’s supermafia (Yale University Press, 2018), and severalOsprey books. He is a regular contributor to Jane’sIntelligence Review and The Spectator CoffeeHouse blog, and is a columnist for Raam opRusland, Intellinews Business New Europe andthe Moscow Times.