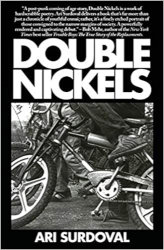 "A post-punk coming of age story, Double Nickels is a work of hardscrabble poetry. Ari Surdoval delivers a book that’s far more than just a chronicle of youthful ennui; rather, it’s a finely etched portrait of those consigned to the narrow margins of society. A powerfully rendered and captivating debut." – Bob Mehr, author of the New York Times best seller Trouble Boys: The True Story of the Replacements

“An astonishing debut—part coming-of-age story, part harrowing mystery that keeps you on the edge of your seat with pacing as electrifying and rapid-fire as a Ramones song. Double Nickels is an impossible-to-put-down hero’s journey through the wasteland of the mid-eighties.” – Jaan Uhelszki, writer producer of Boy Howdy: The Story of Creem Magazine, founding editor, Creem

Lost in the hard days of nothing at summer’s end, while his mother sinks into addiction and mental illness, Tim is an aimless teenage boy caught between the trauma of his past and the emptiness of his future. But late one night at the Stop and Shop, a chance meeting with Cara, a tough young outsider determined to outrun her own pain and loss, sparks a flicker of hope. Will they be able to transcend the crushing limits placed on them in late 1980s rural America?

"There aren't many novels that come right out and strip life down to its very essence, taking away the false facades of humanity in a way that makes the bones grow cold and has the eyeballs searching for a way out. Writer Ari Surdoval isn't one to go looking for the easy answers. His characters feel like they're living on nickels and nails, and don't have much in the way of hope. But that doesn't mean that they've quit trying. Teenager Tim knows what he's up against, but still won't quit. Even when his mother starts the short slide on the opioid express, Tim still looks for a rainbow road. The way Surdoval writes makes it seem like he's walked these long roads alone, and isn't looking for a magic escape. Instead, when he meets someone playing equally long odds, the teenager decides to take a run at redemption and see where it leads, even if he doesn't have a clue what he's betting on. There are moments in this book where time freezes and it feels like life might just not have much future. And other moments when big promises might just let the skies open up and let everyone have a slight new beginning. When the young character Cara appears, the sun seems to make a cameo appearance and life takes on a shine just big enough to promise tomorrow will be worth waiting for. Such a life." - Bill Bentley, Americana Highways

Ari Surdoval lives in Nashville. This is his first novel.