THE IMPOSSIBLE CITY: A Hong Kong Memoir
by Karen Cheung 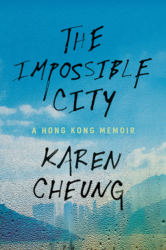 THE IMPOSSIBLE CITY is an accessible, intimate read that will engage readers of personal writing and memoir regardless of where they live, and whether or not they’ve visited Hong Kong.

We have licensed the Polish rights to Burda Media Polska and we have a pending Japanese offer.

WONDERFUL PRAISE FOR THE IMPOSSIBLE CITY

depression with the disintegration of democracy in Hong Kong, depicting a heartrending destruction of Hongkongese cultural identity. . . An outstanding contribution

for any library about one personal experience of political upheaval in Hong Kong.”

“English-language readers might not find a book that more fully captures Hong Kong in such visceral detail and humanity as Cheung’s, from its tragic political history to its hierarchical educational system, its woeful mental-health-care system, its failure to provide affordable housing to its people, its stultifying Confucian family ethos, and its heroic but embattled arts scene.

Hong Kong’s agonizing struggles over the past 25 years are Cheung’s, too, as she tries to find a safe space between the city’s wretched colonial history and the Chinese

Communist Party’s ruthless suppression of human rights there today, and navigates her own debilitating depression even as some two million Hong Kong people

have themselves suffered from post-traumatic stress disorder over the last two years. It’s a grim status report, to be sure, but Cheung doesn’t quite let go of hope for that extraordinary city: ‘. . . and yet. Across the harbor, the lights are on.’”

“In a book that should appeal to young protesters everywhere, the author eloquently demonstrates how ‘it takes work not to simply pass through a place but instead to become part of it.’ Hong Kong is in dire straits, and Cheung brings us to the front lines to offer a clearer understanding of the circumstances. A powerful memoir of love and anguish in a cold financial capital with an underbelly of vibrant, freedom-loving youth.”

“Reflecting on the multivalenced reality of life in Hong Kong, journalist Cheung’s debut leaps from one charged historical moment to the next to capture ‘the many ways a city can disappear, but also the many ways we, its people, survive.’ … A riveting portrait of a place that’s as captivating as it is confounding.”

“Karen Cheung has written a love song to Hong Kong. Her memoir hums with wide-eyed discoveries and the lowest heartache, quiet intimacies and street-shaking roars, the thrill of being lost in this massive, haunted, mythologized, neon city, yet finding oneself in the end.”

“Karen Cheung is an amazingly good writer whose precise observations about Hong Kong puncture the gauzy clichés about mahjong and milk tea. In the Impossible City, she has produced an edgy, highly personal memoir about a generation living in cage-sized apartments, confronting tear gas, electronic surveillance, cultural confusion and depression, as they witness the disappearance of the city they call home.”

—Barbara Demick, author of Nothing to Envy and Eat the Buddha

“With her radiant prose and incisive reporting, Karen Cheung renders modern-day Hong Kong with evocative detail in The Impossible City. The word ‘protest’ lingered in my head as I read Cheung’s words about coming of age in her constantly shifting city under the precarious specter of authoritarianism. There is an unmissable passion and intelligence in this story as Cheung weaves together cultural criticism and memoir, insisting that Hong Kong — her Hong Kong — is worthy of our close attention and love.”

THE IMPOSSIBLE CITY is unique -- there are travelogues from outsiders belonging to an earlier generation that romanticized colonial Hong Kong; books about Hong Kong from the past decade focusing strictly on protests; but this book is about the lives of young people and what Karen Cheung is able to do with words to bring you to this world. It’s also different from other books on cities in that few first-world postcolonial cities are forced to confront questions of political resistance and disappearance the way Hong Kong has. Few books on Hong Kong are also from the perspective of someone who has grown up there and then covered the city as a local beat reporter, and know the city intimately in this way.

Karen Cheung is a writer and journalist from Hong Kong. Her writing has appeared in The New York Times, Foreign Policy, The Rumpus, The Offing, and others. She was formerly a reporter at Hong Kong Free Press, and has worked for the Asia Art Archive, Art Asia Pacific, and Still/Loud, an indie magazine about music and culture in Hong Kong.