IN THE LION'S DEN: Israel and the World
by Danny Danon 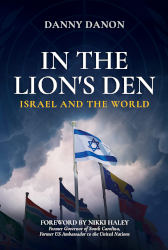 IN THE LION’S DEN: Israel and the World, a political science non-fiction by Danny Danon, will be published by Wicked Son/Post Hill Press in May 2022.

About IN THE LION’S DEN: IN THE LION’S DEN lays out a roadmap for Israel’s future on the regional and global stage by a man who has spent his entire career in his nation’s public service. Danny Danon was Israel’s 17th Permanent Representative to the United Nations and has been a member of the Knesset as well as Minister of Science, Technology and Space, and Deputy Minister of Defense.

Danon concisely lays out an ambitious and forthright plan for an Israeli policy agenda that can secure the country’s future and make it a major contributor to global peace and prosperity. Danon makes a compelling case for an Israel that must be proud of its identity and faith; forges relationships with diverse peoples, regimes, and countries; makes autonomous domestic decisions; and determines its foreign policy without seeking approval from foreign powers or international bodies.

The book begins with a concise explanation of why people beyond the borders of this tiny nation should care about its survival—especially Americans.

Next, Danon argues that a strong foundation for policy and security is built upon a victory mindset. He follows this with a strong case for creating allies wherever they may be found. However, while friendships are important, Israel must also be willing to go it alone.

A foreign policy that is agile and flexible is also necessary—and for that, Danon says preparation and readiness are requisite. Showing and sharing your strengths is a far-reaching way to secure the nation, and Israel’s advancements in medicine, technology, and cutting edge scientific research position it to do so.

Finally, Israel must always commit itself to fighting the scourge of anti-Semitism across the globe.

About the author: Ambassador Danny Danon served as Israel’s 17th Permanent Representative to the United Nations in October 2015, and served in that position for five years. He has also served as Chairman of World Likud, Member of the Jewish Agency Board of Governors, and Chairman of the World Betar.

Danny was a member of Knesset from February 2009 to August 2015. He served as Deputy Speaker of the 18th Knesset, as Chair of the Committee on the Rights of the Child, and Immigration, Absorption and Diaspora Affairs. He also served as Deputy Minister of Defense in the 32nd government. In the 33rd Israeli government, he served as Minister of Science, Technology and Space, serving until his appointment as Israel Ambassador to the United Nations.

Born in 1971 in Ramat Gan, Israel, he attended Blich High School and participated in the Betar youth movement.

Danon is also the author of Israel: The Will to Prevail.

Praise for IN THE LION’S DEN:

“During his five years as Israel’s Ambassador to the UN, Danny Danon surprised his critics and proved time after time that Israel can succeed even in this most challenging of arenas. Danny Danon’s new book, In the Lion’s Den, describes the trials he encountered and the original methods he employed to advance Israel’s interests and present the truth about Israel to the world at the UN. This book is a fascinating, insightful and encouraging read.” – Senator Joe Lieberman

“Danny Danon and I disagree on much that relates to Israel but both us champion active discussion. In the Lion’s Den is Danon’s detailed articulation of his view of a way forward for Israel. It deserves scrutiny and debate, from which Danon has never shied.” – Ali Velshi, Host “Velshi,” MSNBC

“In the Lion’s Den is a fascinating book that explores how international undertakings are woven behind closed doors and how personal relationships are key to the success of any diplomat. Ambassador Danny Danon shows that with determination, wisdom and personal charm, even Israel can succeed in a place as challenging as the United Nations.” – Ambassador Blanchard, former Permanent Representative and Ambassador of Canada to the United Nations

“Have you ever wondered why the United Nations has devoted more time to tiny Israel than to any other nation of earth? Israeli Ambassador to the UN, Danny Danon gives you the answer in his new book. Instead of being frustrated and outraged, Ambassador Danon chose action and brought moral clarity right into the hall of the UN General Assembly. Clear and persuasive, In the Lion’s Den is a must-read for anyone who seeks to understand the unique role of Israel at the UN and in the world today.” – Gordon Robertson, President, CBN

“In this riveting life story, which culminates with his five years as Israel’s ambassador to the UN, Danny Danon reveals a great deal about what makes Israel the amazing country it is—and what makes him such a proud Israeli and gifted storyteller.” – David Harris, CEO, American Jewish Committee