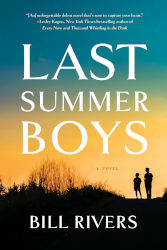 In this rapturous coming-of-age debut, a naive-yet-determined Appalachian boy will go to any length to save his family over the course of one life-changing summer. LAST SUMMER BOYS will be released by Lake Union Publishing on June 1, 2022.

Praise for the Author

“Bill Rivers’s debut novel is a rambunctious ballad to boyhood, duty, and family and a heartfelt salute to those who became the patriots of the Vietnam War. The warmth of these irrepressible characters amid 1968’s cultural storms gives heart to anyone wondering how to make sense of our own highly charged times. It reminds us there’s nothing new under the sun and stubbornly insists we, too, can listen to our better angels.” —General James Mattis, USMC (Ret), 26th Secretary of Defense

“Those seeking a reprieve from our confused and callous culture will find something much more important here: a heartwarming, authentically human call to hold to truth, family, and our common dignity—no matter the cost. In witnessing one brother’s struggle to save another, we remember how, in every age, love renews our wounded world.” —Charles J. Chaput, O.F.M. Cap., 9th Archbishop of Philadelphia

Summer 1968. When thirteen-year-old Jack Elliot overhears the barbershop men grousing, he devises a secret plan to keep his oldest brother, Pete, from the draft. If famous boys don’t go to war, he’ll make his brother their small town’s biggest celebrity. Jack gets unexpected help when his book-smart cousin Frankie arrives in their rural Pennsylvania town for the summer. Together, they convince Jack’s brothers to lead an expedition to find a fighter jet that crashed many winters ago—the perfect adventure to make Pete a hero.

But with a greedy developer determined to flood their valley, a beautiful girl occupying his middle brother’s attentions, a wild motorcycle gang causing trouble in town, and a disturbed neighbor setting fires, Jack realizes it isn’t just Pete who needs saving.

Set during a single, tumultuous summer, this beautifully told tale is a heartwarming tribute to innocence, first love, and the unbreakable bond of brotherhood.

Bill Rivers grew up along the creeks of the Brandywine Valley in Delaware and Pennsylvania. A graduate of the University of Delaware, he earned an MPA from the University of Pennsylvania as a Truman Scholar, one of sixty national awards given annually for a career in public service. Bill worked in the US Senate before serving as speechwriter for US Secretary of Defense Jim Mattis, developing classified and unclassified messages on national security and traveling throughout Asia, Europe, the Middle East, and the Americas. He and his family live outside Washington, DC, where he still keeps a piece of a crashed fighter jet they found in the hills of southeastern Pennsylvania.