THE EMERGENCY: A Year of Healing and Heartbreak in a Chicago ER
by Thomas Fisher 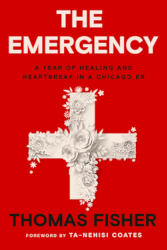 "The Emergency is graphic and gut-wrenching as it should be. It is an undeniable call for a just healthcare system as it will be." —Ibram X. Kendi, National Book Award-winning author of Stamped from the Beginning and How to Be an Antiracist

“With scalpel-like precision and searing patient stories, Dr. Fisher exposes the battlefield of medicine and the scarring—and often-fatal—wounds of inequality. The Emergency is a bat call. Health care doesn’t care, inequality kills, and we must do better.” – Dr. Mona Hanna-Attisha, author of What the Eyes Don’t See

“A captivating blend of memoir and social commentary... deftly explains inequities in health care that have long been in existence but have especially come to light in the wake of the COVID-19 pandemic. Shedding light on the social justice implications on the health care system and an important snapshot of a grim moment in time, this account will appeal to a wide range of readers. Highly recommended.” – Library Journal (starred)

“…Recounts intense experiences treating all kinds of people and problems, shares his deep affection for the South Side of Chicago, and exposes the trouble with health care, especially high costs and racial inequities… Compassion, integrity, and dedication keep medical professionals afloat even as they're at risk of becoming casualties themselves.” – Booklist (starred)

THE EMERGENCY is a doctor's-eye view of the layered crises afflicting a single Chicago community and the entire nation that surrounds it. By turns brutal and beautiful this is a tale of life, death and the people whose efforts often determine which of those two will prevail.” – Jelani Cobb

Covering a year in the life of an ER doc on the South Side of Chicago during a pandemic, you’ll get a first hand account of the day-to-day drama during an unprecedented pandemic and a ferocious epidemic interwoven with a primer in healthcare policy.

Thomas Fisher was raised on the South Side of Chicago and even as a kid understood how close death could feel—he came from a family of pioneering doctors who believed in staying in the community, but on those streets he saw just how vulnerable Black bodies could be. Determined to follow his family's legacy, Fisher studied public health at Dartmouth and Harvard, then returned to the University of Chicago Medical School. As soon as he graduated, he began working in the ER that served his South Side community. Even as his career took him to stints at the White House, working on what would eventually become the Affordable Care Act and helping develop HMOs for underserved communities, he never gave up his ER rotations. He knew that to really understand healthcare disparities and medical needs, you had to stay close.

The emergency room is designed for the most urgent cases, but it is often the first resort for South Side residents without any other choice. Fisher deals with those patients with necessary dispatch, but what he really wants to do is to spend his time helping them understand how it is they ended up in the ER—talk to them about the role economics plays in their health; the history of healthcare for the poor and marginalized; why Black people in particular distrust the medical profession; why they don't have a personal physician; the effect of food deserts and education gaps on their health; and, most of all, why they live in a society that has deemed their bodies and lives as less important than others. In this book he gets to have those lost conversations. This is a page-turning and mind-opening work that will offer readers a fresh vision of healthcare as a foundation of social justice.

Thomas Fisher is a board-certified emergency medicine physician at The University of Chicago. He advises startups, venture capital firms, and government agencies through Headwaters Consulting LLC. Fisher served as a 2010-11 White House Fellow, and as the special assistant to Secretary Kathleen Sebelius, he worked on ACA regulations and the HHS Action Plan for Reducing Racial and Ethnic Health Disparities. Fisher continues to deliver care at The UChicago Medical Center, where he serves the same South Side community where he was raised. Fisher holds a BA from Dartmouth College, an MPH from Harvard, and an MD from UChicago.