REDWOOD AND WILDFIRE
by Andrea Hairston 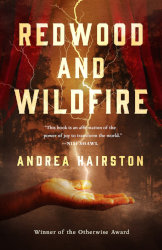 Originally published in 2011 by a small press, Tor is reissuing this historical fantasy to a wider audience. At the turn of the 20th century, Redwood, an African American woman, and Aidan, a Seminole Irish man, journey from Georgia to Chicago, from haunted swampland to a “city of the future.” They are gifted performers and conjurors, struggling to call up the wondrous world they imagine, not just on stage and screen, but also using the power of hoodoo, which is the power of the community with the capacity to heal and cause change. Living in a system stacked against them, Redwood and Aidan’s search for a place to be who they want to be is an exhilarating, painful, magical adventure. We also have a second reissue from Andrea Hairston, WILL DO MAGIC FOR SMALL CHANGE, which is set to publish in October 2022.

The original edition of REDWOOD AND WILDFIRE won the Otherwise Award and the Carl Brandon Kindred Award in 2011! It’s also one of BookPage’s Best 10 Books of February 2022 and has been featured on most anticipated lists from Ebony, Buzzfeed, Nerd Daily, Bookriot, and more. It’s received two starred reviews from Publishers Weekly and BookPage. In theirs, Publishers Weekly says “Hairston captures an impressive depth of tenderness between her leads and makes a moving argument for the power of stories and songs in the face of bigotry. The novel unfurls slowly, allowing each character the space to come into their own fully. It’s a spectacular feat.”