THE GRIMROSE GIRLS
by Laura Pohl 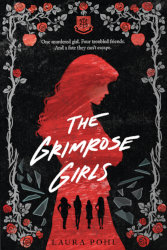 Tag line: Four troubled friends, one murdered girl…and a dark fate that may leave them all doomed

About THE GRIMROSE GIRLS: The Descendants meets Pretty Little Liars in this story of four reimagined fairytale heroines who must uncover connections to their ancient curses and forge their own paths...before it's too late.

After the mysterious death of their best friend, Ella, Yuki, and Rory are the talk of their elite school, Grimrose Académie. The police ruled Ariane's death as a suicide, but the trio are determined to find out what really happened.

When Nani Eszes arrives as their newest roommate, it sets into motion a series of events that no one could have predicted. As the girls retrace their friend's final days, they discover a dark secret about Grimrose—Ariane wasn't the first dead girl.

They soon learn that all the past murders are connected to ancient fairytale curses...and that their own fates are tied to the stories, dooming the girls to brutal and gruesome endings unless they can break the cycle for good.

“Grief, identity, and friendship intersect in this enthralling mystery with dark magical undertones that ingeniously plays with fairy-tale tropes to tell a feminist story about empowerment and grappling with how to break away from the confines of societal expectations of girls. Fans of empowering feminist fairy-tale retellings will love this.” – Kirkus, starred review

About the author: Laura Pohl is a YA writer who majored in Literature and works as an editor and translator. She likes writing messages in caps lock, quoting Hamilton and obsessing about Star Wars. When not taking pictures of her dog, she can be found curled up with a fantasy or science-fiction book. A Brazilian at heart and soul, she makes her home in São Paulo. Her debut novel, The Last 8, won the International Latino Book Award as Best YA Fiction book. The sequel, The First 7, published in 2020. www.onlybylaura.com