OUT OF THE CORNER
by Jennifer Grey 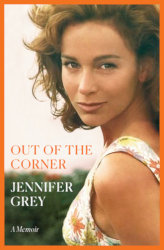 If the line “NOBODY PUTS BABY IN THE CORNER!” means anything to you (or hopefully to your publishers), then this is a memoir that must be read and shared!

OUT OF THE CORNER is a beautiful and compelling memoir by Jennifer Grey that offers a thorough examination of the defining moments of Jennifer’s wild ride of a life. Raised Jewish in a multi-generational show business family (her father is Broadway and film legend Joel Grey), Jennifer was “born into the business.” And as anyone in show business will tell you, it is an intense series of highs and lows. For Jennifer this included becoming an overnight sensation after Dirty Dancing, only to finding herself, shortly thereafter, unable to land a role in another movie. On the advice of agents and her own mother, Jennifer got a nose job, and then another one. She soon became unrecognizable, and worst of all she still could not land a decent acting gig. No surprise, in attempt to numb the pain of her lackluster acting career, Jennifer became addicted to drugs and alcohol, and eventually found her sobriety, which she has kept for more than 20 years. With her demons under control, she won the hard-fought battle back from professional anonymity, which resulted in a number of considerable performances in film television, and Broadway, and the eventual return to dance with a season eleven win on the US version of Dancing With the Stars.

For those who are under 40, there was once a movie called DIRTY DANCING… And it was EVERYTHING. Back in 1987, so many young women wanted to be Jennifer Grey, or rather Baby Houseman, the character she played in the movie that really did “define a generation.” Jennifer, like Baby, was always considered to be “other.” Not quite pretty enough to land the ingénue roles (remember her as Ferris Bueller’s angry sister Jeannie and flirting with Charlie Sheen’s character Garth Volbeck?), defined by the size of her nose, often overlooked and rarely considered. Then at the age of 27, Jennifer managed to land a part in a small, low-budget film about a teenage girl, stuck with her family at a resort in the Catskills, New York in 1963. Sheltered and under her father’s thumb for her entire life, she takes a chance, falling in love with the resort’s dance instructor, a la Patrick Swayze (all while learning some serious dance moves). At the risk of losing her relationship with her father, she chooses love and to spread her wings and fly (remember the lift?!).

OUT OF THE CORNER reveals the many parallels between Jennifer’s life and Baby’s. The two found power in their burgeoning sexuality as they grew into womanhood, they both had to fight to define themselves outside of their parents’ purview, they shared a need for independence, and the burning desire to take a chance on love regardless of the consequences. Perhaps all these similarities are what helped her land the iconic role that made her career.

Jennifer’s romantic life and her family relationships are also the stuff of Hollywood legends. Not many people can say they were engaged to both Matthew Broderick and Johnny Depp (both in the same year). She did ultimately marry her husband of nineteen years, actor and screenwriter Clark Gregg, with whom she had a daughter. The book is also filled with behind the scene moments onset, including with co-star Patrick Swayze, as well as stories about Jennifer’s friendships and encounters with various Hollywood personalities, from Winona Ryder to Sean Penn to Rob Lowe to Madonna, to name a few.

OUT OF THE CORNER is a truly impressive narrative work, thoughtfully considered and penned over a number of years by Jennifer’s own hand. And while she made a name for herself in a blockbuster movie, this is hardly a frothy celebrity bio. Instead, Jennifer tackles and examines the tough subjects along with Hollywood insider moments. These include grappling with establishing her own identity – away that of her famous father -- seeking approval and acting out to compensate for feelings of low self- esteem, anxiety, codependency, owning her truth, gaining control over her (out of control) life, radical self-acceptance, self-love and gratitude. Jennifer deftly shines a light on the influences of her life, both good and bad, that have ultimately shown her the path to a place of grace, as an actress, daughter, mother, and woman.

So from this woman, who was often judged and perceived as “Not Enough,” comes this powerful rendering of a fully drawn life that proves she is more than enough.