CHILDREN OF CHICAGO
by Cynthia Pelayo 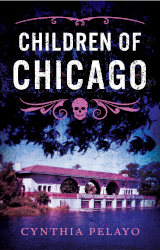 ONE OF “THE BEST NEW CRIME NOVELS”—Book Riot

" A harrowing story that preys off of current events as much as its well-developed monster, this is a stellar horror novel that fires on all cylinders, from the first page through to its horrifying conclusion."-- Library Journal (Starred)

"Pelayo's dark, reimagined fairy tale will have readers leaving their lights on long after they’ve turned the last page."—Booklist

ONE OF THE "MOST ANTICIPATED RELEASES OF 2021"—Book Riot

ONE OF "2021'S MOST ANTICIPATED NEW RELEASES"—Books in The Freezer

“Pelayo has crafted a twisted new take on an old folktale in CHILDREN OF CHICAGO.”—CrimeReads

This retelling of the Pied Piper fairytale set in present-day Chicago is an edge of your seat, chills up the spine, thrill ride. ‪ When Detective Lauren Medina sees the calling card at a murder scene in Chicago’s Humboldt Park neighborhood, she knows the Pied Piper has returned. When another teenager is brutally murdered at the same lagoon where her sister’s body was found floating years before, she is certain that the Pied Piper is not just back, he’s looking for payment he’s owed from her. Lauren’s torn between protecting the city she has sworn to keep safe, and keeping a promise she made long ago with her sister’s murderer. She may have to ruin her life by exposing her secrets and lies to stop the Pied Piper before he collects what he believes is due.

Cynthia "Cina" Pelayo is the author of Loteria, Santa Muerte, The Missing, and Poems of My Night, all of which have been nominated for International Latino Book Awards. Poems of My Night was also nominated for an Elgin Award. She holds a Bachelor of Arts in Journalism, a Master of Science in Marketing, a Master of Fine Arts in Writing, and is a Doctoral Candidate in Business Psychology. Cina was raised in inner city Chicago, where she lives now with her husband and children. Find her online at www.cinapelayo.com and on Twitter @cinapelayo