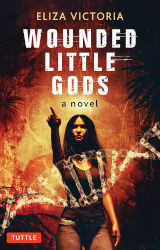 * By a winner of top Philippine literary awards, including the Philippine National Book Award.

* The use of Filipino myth and folklore bring a new twist to the classic scifi theme of the fictional world, while genetic experiments add an element of dystopia in a book where the human meets the inhuman, and the inhumane.

* An absorbing story for a wide audience—adults and teens, lovers of folklore and ythology, lovers of scifi and dystopic fiction.

* Author Neil Gaiman has been widely outspoken about his love for Filipino mythology and has expressed his appreciation for Filipino creators breaking into the fiction scene, "I feel like you and all the smart Filipino writers and artists out there are doing something really brave and powerful, making a whole new wave of Filipino art and story. Well done!"

Regina was born and raised in the small town of Heridos, where gods and spirits walked the earth.

Until they didn't. Ten years ago, the town's harvest failed utterly, and the people- believing the gods had abandoned them—left their farms and moved on.

Now, on a Friday before a long weekend, Regina ends her workday at an office in Makati, and walks home with a new colleague, Diana. Following a strange and disturbing conversation between them, Diana does not show up at work on Monday, nor Tuesday, nor Wednesday.

On Thursday, Regina finds a folded piece of paper In her bag. In Diana's handwriting are two names and a strange map that will send Regina back to her hometown. Here, in her quest to find Diana, she encounters rumors of genetic experiments, stumbles upon a strange facility that no one seems to know about, finds herself in places that don't exist, and discovers that people are not who they seem to be. And the biggest question in the bizarre chain of events is not what, or how, but why?

Wounded Little Gods is a tale that brings mythology to a sci-fi thriller that's filled with a sense of place—a place where gods are in many ways human and point to the ways in which humans can be inhumane. As Regina struggles to unwind the knots surrounding the mystery of this facility and the people connected to it. She discovers that she is more intertwined in the strange events in her hometown than she ever knew.

Eliza Victoria is the author of several books including the Philippine National Book Award-winning Dwellers, the graphic novel After Lambana, and others. Her fiction and poetry have appeared in several online and print publications including LONTAR: The Journal of Southeast Asian Speculative Fiction, The Dark Magazine, and The Apex Book of World SF, among others. Her work has received top Philippine literary awards, including the Carlos Palanca Memorial Awards for Literature. elizavictoria.com