ALL ABOUT ME
by Mel Brooks 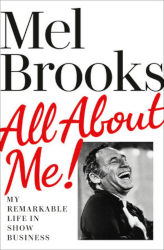 'Mel Brooks has made three of the best comedies ever made. Read all about it' -- John Cleese

We will be publishing it as a Ballantine hardcover on November 30th with an announced first printing of 100,000.

This is a long awaited memoir from a comic genius whose career includes the trailblazing irreverent films Blazing Saddles, Young Frankenstein, History of the World Part I and Spaceballs, TV shows like Get Smart and Your Show of Shows, and bringing The Producers to screen and stage, winning an Oscar for Best Screenplay and the Tony Award for the effort. He is among a few entertainers to win all four major entertainment prizes, with an Emmy and Grammy to go along with those other accolades, the latter for his The 2000 Year Old Man collaborations with Carl Reiner. His memoir cover everything from his childhood growing up in Brooklyn, to his service in World War II, to his early years in show business alongside such greats as Sid Caesar, Neil Simon and Reiner, and his long marriage to the late The Graduate star Anne Bancroft. Brooks has infused the book with his signature sense of humor, irreverence and sense of nostalgia.

We will be using a “sizzle reel” for our virtual Frankfurt meetings and sharing it with you hoping it helps publishers realize what a legend Mr. Brooks is: https://randomhouse.box.com/s/ow31ot147us1azdgmj3da06wr1yl5jjs

British rights licensed to Century/Cornerstone and we have a preempt in Italy based only on the tip sheet!!!

And below is an amazing run down of talent that have read and have weighed in about their delight in ALL ABOUT ME!

"Laugh-out-loud hilarious and always fascinating, from the great Mel Brooks. What else do you expect from the man who knew Jesus and dated Joan of Arc?"

“This book has everything you would ever want Mel Brooks to tell you, and at 462 pages it is still not enough! Pure joy.”

"Mel Brooks is Mount Hilarious. All any of us can do is look up and feel small and not as funny in comparison."

"No one ever made me laugh harder than Mel Brooks. There was no more magical couple than Mel and Anne Bancroft. I treasure every memory with him and with them."

“If you are holding the great Mel Brooks’s memoir and you are wasting time reading this blurb, you’re an idiot."

“This marvelous book by the great man himself will give you a mega-dose of sheer reading pleasure. It's the personal, delightfully revealing life story of a giant comic talent. All About Me! delivers a much-needed, therapeutic supply of full-out laughter."

“All About Me! isn't a typical comedy memoir, and why would it be? Mel is a singular talent, still witty, still sharp and still zinging us after all these years. These stories thread a hilarious narrative that is also profound and touching. Reading this you'll learn very quickly why Mel Brooks is a king of comedy.”

"Not since the Bible have I read anything so powerful and poignant. And to boot--it's a lot funnier!"