SCREAMS FROM THE DARK: 29 Tales of Monsters and the Monstrous, edited
by Ellen Datlow 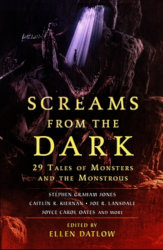 From werewolves and vampires, to demons and aliens, the monster is one of the most recognizable figures in horror. But what makes something, or someone, monstrous?

In Screams From the Dark, award-winning and up-and-coming authors like Stephen Graham Jones, Richard Kadrey, Cassandra Khaw, and Joyce Carol Oats attempt to answer this question. These stories run the gamut from traditional to modern, from mainstream to literary, from familiar monsters to the unknown and unimaginable.

This bone-chilling collection has something to please—and spook—everyone, so lock your doors, turn off your lights, and try not to scream.

ELLEN DATLOW has been editing science fiction, fantasy, and horror short fiction for over thirty-five years as fiction editor of OMNI Magazine and editor of Event Horizon and SCIFICTION. In addition, she has edited more than a hundred science fiction, fantasy, and horror anthologies, including the annual The Best Horror of the Year series, The Doll Collection, Mad Hatters and March Hares, The Devil and the Deep, Echoes, Final Cuts, Body Shocks, and When Things Get Dark.

She lives in New York and co-hosts the monthly Fantastic Fiction Reading Series at KGB Bar.

HORROR'S TOP ANTHOLOGY EDITOR: Ellen Datlow is one of the most decorated horror anthology editors in the field. Among her many accolades, she has won nine World Fantasy Awards; multiple Locus, Hugo, Stoker, International Horror Guild, and Shirley Jackson Awards; and was honored with the Life Achievement Award given by the Horror Writers Association, in acknowledgment of superior achievement over an entire career. Given her reputation, her name is a guarantee for high-quality fiction.

BESTSELLING AND AWARD-WINNING CONTRIBUTORS: this anthology includes stories from some of horror's most beloved authors, including Stephen Graham Jones, John Langan, Priya Sharma, and Indrapramit Das.

THE PERFECT LENGTH FOR DEVOURING: Horror has a long history of success in short fiction--from short stories to novelettes. Nightfire's audio anthology of short horror stories, Come Join Us By the Fire, has more than 282,000 downloads since October 2019, proving there's an appetite for this easily consumable format.