THE LITTLE BOOK OF SATANISM: A Guide to Satanic History, Culture, and Wisdom
by La Carmina 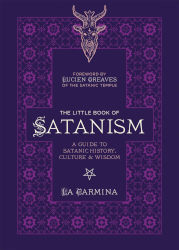 Discover the fascinating history and culture of Satanism through the ages and learn why many Satanists today stand up for free inquiry and personal liberty with this fascinating guide by an author with a broad and international platform!

Satanism is too often misunderstood as a religion that makes blood sacrifices to an evil, horned Prince of Darkness. In reality, modern Satanists are nonviolent and nontheistic, and consider the Devil to be a meaningful metaphor for the pursuit of knowledge, reason, and justice.

THE LITTLE BOOK OF SATANISM details the “mark of the beast” in cultural and historic movements over the centuries, which have informed the sincerely held beliefs and practices of Satanists today. Written by award-winning alternative culture journalist and blogger La Carmina, this comprehensive guide includes:

A foreword from Lucien Greaves, activist, spokesperson, and cofounder of The Satanic Temple

Information on Satan’s biblical origins, and his various names, appearances, and symbols

Details on his age-old role as a scapegoat, from medieval witch trials to the 1980s Satanic Panic

An overview of modern philosophy and practices, focusing on The Church of Satan, The Satanic Bible, and The Satanic Temple

Examples of the Devil’s influence on art, literature, music, and films—from Paradise Lost to Rosemary’s Baby

This accessible book explains how Satanism developed in the context of social history while debunking lurid conspiracy theories about serial killers and ritual abuse. It includes a primer on various Satanic practices such as social activism, rituals, and holidays. In the spirit of the fallen angel Lucifer, be inspired by Satanism’s affirmative values that courageously oppose arbitrary authority and champion nonconformity.

La Carmina is an award-winning alternative culture journalist and TV host. She runs the leading blog about Goth travel, fashion and Satanism (LaCarmina.com/blog), which was featured in The New York Times and Washington Post. La Carmina is the author of four books including Crazy, Wacky Theme Restaurants: Tokyo and Cute Yummy Time, published by Penguin Random House. She received a journalism prize from the Society of American Travel Writers, and her writing has appeared in Time Magazine, CNN, Business Insider and Architectural Digest. As a TV personality, La Carmina has danced with William Shatner and Henry Winkler on NBC’s Better Late Than Never, dined with Japanese monsters on Andrew Zimmern’s Bizarre Foods, negotiated a $666 taxidermy head on Discovery Channel’s Oddities, cooked cute food on The Today Show, and debated “bagelhead” body modifications on The Doctors. She is a graduate of Columbia University and Yale Law School. Follow La Carmina’s Gothic adventures in over 70 countries on LaCarmina.com and social media @LaCarmina.