THE FIVE FORCES THAT CHANGE EVERYTHING: Shaping the Future of Humanity
by Steven S. Hoffman 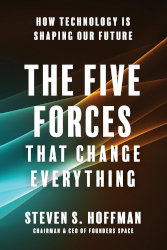 As machines become capable of doing most of the work people have performed for centuries, we are headed for a massive social reorganization.

Nanotech is at the point where it’s possible to unleash invisible robots and new materials into the world that permanently alter life on Earth. With genetic engineering, we have taken evolution into our own hands, creating new species of plants and animals that never existed before. We’re developing AIs that can predict future events, create lifelike simulations, and learn from their own mistakes. And space technology is advancing toward the point where visiting other planets and discovering alien life forms will no longer be the stuff of science fiction.

In THE FIVE FORCES THAT CHANGE EVERYTHING, venture capitalist and CEO of Founders Space Steve Hoffman takes you on a journey to see what the most brilliant minds of our age are dreaming up. Hoffman reveals how new scientific breakthroughs and business ventures are poised to reshape our lives and turn science fiction into fact. From Silicon Valley biohackers boosting their IQs to scientists in Japan creating lifelike robots, and Chinese labs developing human-monkey chimeras, Hoffman gives an inside look at the limits of what’s possible and the impact these developments will have.

Hoffman delves into the hard questions: Should we modify the genetic code of life to produce new crops, cures for cancer, and DNA-edited babies? Is it possible to preserve any privacy in a world with billions of surveillance devices, where every action we take is parsed, analyzed, and recorded in a database? What happens when AI reaches or exceeds the level of human intelligence? How would it feel to connect our brains directly to one another and exchange thoughts, memories, and emotions? And what does it mean to merge with our machines and establish a class of cyborgs?

Along the way, Hoffman shows how these innovations are part of the five fundamental forces driving humanity forward. Our creations not only have the power to enable humans to live longer, healthier, richer lives, but also the potential to permanently change—and even destroy—us. The decisions we make in the coming years will determine who and what the human race becomes.

About the author: As the captain and CEO of Founders Space, one of the world's leading startup incubators and accelerators, Hoffman is one of the industry’s leading experts with over two decades experience launching, mentoring, and accelerating over 100 new businesses. He has been in the trenches and seen it all. Having founded three venture-funded startups and two bootstrapped ones, Hoffman knows what it's like to be on the front lines.

Hoffman’s personal and professional network includes many of Silicon Valley’s most respected VCs, entrepreneurs, influencers and technologists and key executives at Fortune 500 companies like Google, Facebook, and LinkedIn. Nearly every major VC firm in Silicon Valley has spoken at Founders Space over the years. Hoffman’s mailing list is over 100,000 readers, he has 45,000+ personal followers on Facebook, Twitter and LinkedIn combined, and The Founders Space website has 25,000+ monthly active users.