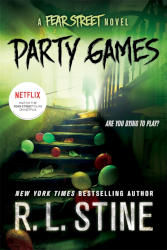 Rights to the Fear Street books have now sold to Ast in Russia, Metaixmio in Greece, Mondadori in Italy, Media Rodzina in Poland, and Guney Kitap in Turkey!

Netflix has now released the trailer for their three Fear Street movies and announced the air dates here in the U.S. for three consecutive weeks in July 2021.

A new young adult horror novel in R.L. Stine’s bestselling Fear Street series, which has sold 80 million copies worldwide, making it one of the bestselling young adult series ever

For the first time in almost two decades, R.L. Stine makes his triumphant return to Shadyside, a town of nightmares, shadows, and genuine terror, and to the bestselling series that began his career writing horror for the juvenile market. With more than 80 million copies sold around the world, Fear Street is one of the bestselling young adult series of all time. Now, with Party Games, R.L. Stine revives this phenomenon for a new generation of teen readers; the announcement of new Fear Street books caused a flurry of excitement both in the press and on social media, where fans rejoiced that the series was coming back.

Her friends warn her not to go to Brendan Fear’s birthday party at his family’s estate on mysterious Fear Island. But Rachel Martin has a crush on Brendan and is excited to be invited. Brendan has a lot of party games planned. But one game no one planned intrudes on his party—the game of murder. As the guests start dying one by one, Rachel realizes to her horror that she and the other teenagers are trapped on the tiny island with someone who may want to kill them all. How to escape this deadly game? Rachel doesn’t know whom she can trust. She should have realized that nothing is as it seems… on Fear Island.

“Stine revives his Fear Street series with a tale that brings together a group of Shadyside teenagers for a night of terror in an eerie mansion.... Aimed at Goosebumps graduates, the story is constructed in short chapters that each end with a grab in the dark or some chilling discovery, and it is replete with horror tropes that are carefully gauged to titillate or gross readers out without really disturbing them…Stine again demonstrates that he is a true master of the formula.” —Booklist

“The author’s instinctive for creative kills remains strong despite a 15-plus-year absence from the series...These books are designed to be a pleasant diversion as well as fodder for nightmares...and the author doesn’t disappoint.” —Kirkus

“One does not need to have read the prior Fear Street novels to enjoy Party Games; readers can dip right in. The hook is the hopeful, romantic dreams of a likable seventeen-year-old girl, but the book becomes more complicated as a world is created on Fear Island. How intoxicating to have the freedom of one’s own space, especially for older teens, who are preparing to go off on their own. But this freedom might have a cost—isolation has drawbacks as the games begin and there is uncertainty about what is real and what is a game. The pacing of the book keeps the reader intrigued as the device of real-vs.-game is played out. Teens who love not only romance, but mystery/suspense as well, will keep turning the pages to find out if romance blooms and the lovers survive. This is recommended especially for younger teens, but some older teens will enjoy this as well.” —VOYA