BETWEEN THE LIGHTHOUSE AND YOU
by Michelle Lee 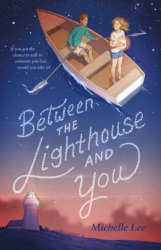 A debut middle-grade novel about a town that can receive messages from the dead, and the young boy and girl who form an unlikely friendship to contact their lost loved ones and face their grief―perfect for fans of the New York Times bestselling Wish by Barbara O'Connor.

About BETWEEN THE LIGHTHOUSE AND YOU:

Alice Jones’s mother died in a boating accident. Well, that’s what everyone says. Alice doesn’t believe them—her mother’s body was never recovered off the coast of Aviles Island, and Alice has always thought she might still be out there somewhere. Then Alice discovers that the residents of Aviles know how to communicate with loved ones who have died. If Alice can go there and try to contact her mother, she might have all the answers she needs.

For generations, Leo Mercury’s family has been in charge of the Aviles Island lighthouse, and Leo himself is determined to take after his beloved grandfather and be a Lighthouse Keeper one day. When nosy Alice Jones shows up for the festival, asking questions about the tidings that outsiders shouldn’t, Leo knows it’s up to him to protect the island’s traditions. But he starts to realize that he and Alice may actually want the same things—and together, they can believe in the impossible, even if no one else will.

BETWEEN THE LIGHTHOUSE AND YOU is an emotional, heartwarming story about love, grief, and letting go.

Michelle Lee loves writing books with hints of magic that make the real world sparkle. She's a professor of English, as well as an award-winning scholar, fiction writer, and poet. She earned her Master's in Creative Writing and her PhD in Literature from the University of Texas at Austin. She lives with her husband Charles and daughter Sophie in Florida where they often walk along the beach and talk about how to make their big dreams come true. Between the Lighthouse and You is her debut novel. https://www.michelleleewritesmagic.com