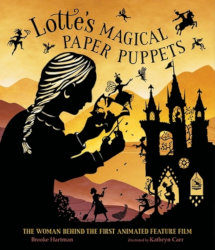 A lyrical picture book biography of a pioneer of animation: the talented woman who created the first feature length animated film.

Lotte thinks the cinema is magic. But Lotte doesn’t just want to watch the magic: she wants to make it.

Before Walt Disney made history with Snow White, Lotte Reiniger created what is considered one of the first feature-length animated films: The Adventures of Prince Achmed. With the outset of World War II, Lotte had to leave her home in Germany, fleeing from place to place for years. But she never stopped creating. Through a love of fairy tales, a strong creative vision, and her uniquely expressive paper puppets, Lotte brought new possibilities to the world of film.

Written in gorgeous lyrical prose, and illustrated with striking papercut illustrations that evoke Lotte’s classic silhouette creations, this captivating picture book will introduce readers to the life and art of an unsung creative trailblazer.

Brooke Hartman is an Alaskan mom and author of silly, serious, and sometimes strange stories for young readers, whose writing has garnered national awards. When she isn’t writing, you can find her fishing, flying, and having fun with her family, enjoying all the magic that life has to offer.

Kathryn Carr is an artist who works in all things paper, including creating greeting cards, showing in galleries, and teaching art classes. She illustrated Lizbeth Lou Got a Rock in Her Shoe by Troy Howell (Ripple Grove Press). She currently lives in Pittsburgh, PA.