THE LAST COMMANDMENT
by Scott Shepherd 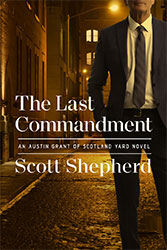 Michael Koryta, NY Times bestselling author of Never Far Away - Scott Shepherd is a marvelous storyteller, and The Last Commandment is further proof of his abilities. Smart, funny, and layered with a terrific sense of time and place, the story rockets from one twist to the next while always deepening the questions of family, trust, and the weight of old sins. A gem of a thriller, not to be missed.

KIRKUS: A serial killer seems to be taking his cues from Agatha Christie and Ellery Queen. A fast-paced tale that weds its golden-age homage to some serious violence. Sinners beware.

Bodies are turning up in London and New York City, and each of the murders corresponds to a transgression of one of the Ten Commandments…

Bodies are turning up in London and New York City, and each of the murders corresponds to a transgression of one of the Ten Commandments…

When three seemingly unconnected victims in London are all murdered with matching sequential Roman numerals carved into their foreheads, Metropolitan Police Commander Austin Grant finds his answer in one of the last places he’d expect: the Holy Bible. Each of the deaths corresponds to a transgression of one of the Ten Commandments, and Grant must find the killer before the remaining Commandments are commemorated with homicides.

Unfortunately for Grant, the next victim with a Roman number on their forehead turns up not in London, but across the pond at the iconic St. Patrick’s Cathedral in New York City, turning this English murder mystery into a transatlantic thriller spanning two global cities each with its own rich history and culture. Commander Grant must team up with a charming NYPD detective named John Frankel, as well as his own estranged daughter Rachel—a cunning investigative reporter with conflicting feelings about her father but an undeniable chemistry with the young Detective Frankel.

Terrific author credentials: Scott Shepherd is an acclaimed screenwriter, producer, and novelist with an extensive list of credits including some of the most popular television series from the past three decades: The Equalizer, Miami Vice, Quantum Leap, Tru Calling, The Dead Zone, Haven and Designated Survivor, among others. He has written two previous novels: The Seventh Day, an apocalyptic Western optioned by Televisa USA as a television series, and Descending Son, a horror-noir that debuted at #1 on Amazon’s Kindle U.S. horror novel list. Shepherd has also collaborated with a number of best-selling novelists on various television projects including Stephen King, Harlan Coben and Karin Slaughter.