WHEN YOU AND I COLLIDE
by Kate Norris 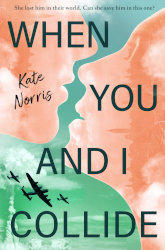 Tagline: A race against time, war, and the very fabric of the universe itself, perfect for fans of Sliding Doors and 11/22/63.

About the book: Sixteen-year-old Winnie Schulde has always seen splits—the moment when two possible outcomes diverge, one in her universe and one in another. Multiverse theory, Winnie knows, is all too real, though she has never been anything but an observer of its implications--a secret she keeps hidden from just about everyone, as she knows the uses to which it might be put in the midst of a raging WWII. But her physicist father, wrapped up in his research and made cruel by his grief after the loss of Winnie's mother, believes that if he pushes her hard enough, she can choose one split over another and maybe, just maybe, change their future and their past.

Winnie is certain that her father's theories are just that, so she plays along in an effort to placate him. Until one day, when her father's experiment goes wrong and Scott, the kind and handsome lab assistant Winnie loves from afar, is seriously injured. Without meaning to, Winnie chooses the split where Scott is unharmed. And in doing so, finds herself pulled into another universe, an alternate reality. One that already has a Winnie.

In this darkly thrilling novel that blends science and war with love and loss, some actions just can't be undone.

About the author: Kate Norris received her MFA from Ohio State University, where she taught creative writing and served as fiction editor of The Journal and an associate editor of The Ohio State University Press's Non/Fiction Collection Prize. Her short stories and non-fiction have appeared in One Teen Story, Iron Horse Review, Sycamore Review and The Threepenny Review, among others. She hopes to never encounter her doppelgänger. She first became intrigued by the weirdness of the quantum world reading the works of physicists like Schrodinger, Fermi, Einstein, and Heisenberg as an undergrad at St. John's College, where she got to perform experiments with the campus Faraday cage and attend parties in a Foucault pendulum pit. https://www.katenorriswrites.com/

Praise for WHEN YOU AND I COLLIDE: