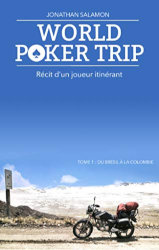 "On April 1, 2013, I gave up everything. My job, my family & my country to achieve a dream: a round-the-world trip on my motorbike, with no return date & financed by poker.

Two years alone on the road, but never alone nor lonely, Jonathan has experienced everything, the luxurious villas, the sordid hotels, the hospitality, the gambling, the frantic poker games, the bad times, the anguish, the joys, the powerful & ephemeral friendships, the love encounters, the heart-wrenching farewells, the motorbike breakdowns & a feeling of absolutefreedom...

After speding a month in Rio de Janeiro, Brazil, he buys, thanks to his poker earnings, a motorbike at Ciudad delEste, border town of Paraguay.

Final point to this incredible adventure: Las Vegas, at a Poker World Championship in July 2015.

Jonathan Salamon worked as an architect for two years before deciding to travel to South America, financing his trip with what he would make out of poker.