THE WEDDING NIGHT
by Harriet Walker 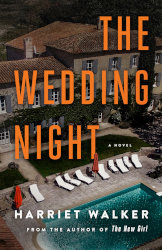 What do you do when the wedding of your dreams turns into a nightmare?

When a destination wedding is cancelled, a group of university friends travel to a luxurious villa in the South of France, determined to cheer up the bride-that-was and make the best of a pre-paid holiday.

But after a wild night of drunken revelry, the friends awake to find themselves with no memory of the last twelve hours - and surrounded by the traces of a wedding that wasn't supposed to have happened . . .

As last night's hangover wears off, the guests find themselves with more questions than answers.

Did a wedding take place?

Who is responsible for an ominous message in the guest book, congratulating the happy couple?

Why does the would-be bride seem so afraid?

And who is the mysterious, shadowy figure who seems to be watching the villa?

Each guest is hiding something. But what? And can they piece together the events of the wedding night before it is too late?

THE WEDDING NIGHT will be published on June 1, 2021 as a Ballantine Trade Paperback Original. British rights have been licensed to Hodder UK.

Harriet Walker is the fashion editor of The Times (UK) and author of THE NEW GIRL. She has been a journalist for more than a decade and has also written for Vogue, Elle, and Harper's Bazaar, among others. Born in Glasgow and raised in Sheffield, Walker studied English at Trinity College, Cambridge, and now lives in South London with her husband and two children.