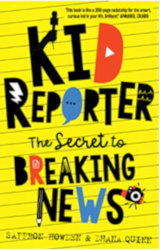 You don’t need to be an adult to break news and change the world. You can start your career as a kid reporter right now.

Children’s news specialists Saffron Howden and Dhana Quinn uncover all the secrets to becoming a journalist, including how to:

Kid Reporter gives young people the tools to find their voice and use it, to build their own credible and meaningful platforms. It contains all the secrets to becoming a reporter: how to research and interview; how to write and produce; and how to become a publisher or broadcaster (from school newspapers to YouTube shows to news websites to podcasts).

It also acts as a timely handbook to build media literacy – to help children navigate the onslaught of information online. It will teach them to spot ‘fake news’, understand different perspectives, and uncover bias.

Importantly, Kid Reporter will help young people become responsible, credible media producers at a crucial time in history when children are increasingly agents for change. Movements to address inequality (Malala Yousafzai), climate change (Greta Thunberg), and violence (March for Our Lives) show that children want to be an active part of the solutions to global problems. This book will give them the tools to do so.

Please note that even though a lot of the examples of news stories are Australian (and these would need to be adapted for your market) the how-tos, the tips, the toolkits, and the overall content of the book is universal. It truly is both informative and fun!

SAFFRON HOWDEN is a mum, journalist, and national leader in civics education and media literacy. She started and edited Australia’s only national newspaper for kids, Crinkling News, and pioneered children’s news literacy programs. She has worked for major news organisations, including The Sydney Morning Herald, The Daily Telegraph, AAP and the BBC. She was Google News Initiative’s first Teaching Fellow for Australia & New Zealand and developed a digital citizenship curriculum for Facebook Asia Pacific.

DHANA QUINN is a freelance writer and mother of three. She has worked as a radio, television and print journalist, which included producing news content for school-aged audiences for Crinkling News and the ABC’s education program Behind the News. She is an advocate for children’s rights and education, holds a Master of International and Community Development and has qualifications in editing and English language teaching.

‘Saﬀron Howden is a ceaseless campaigner for making news and media accessible to kids. It’s such important work. Kid Reporter is the perfect gift for the curious, smart young person in your life.’ ― Annabel Crabb, journalist, TV presenter and political writer

‘Clear, simple, direct and engaging, Kid Reporter isn’t just for kids. If you want to be a journalist, if you care about the news or you’re a journalist who wants to remind yourself about how the job is done, this book is for you. It is a wonderful, timely guide to what news is, how it’s produced and why it matters. After more than 30 years in the game, even I learned a thing or two.’ ― Peter Greste, Professor of Journalism, University of Queensland

‘Saﬀron Howden and Dhana Quinn let everyone in on the secret all newshounds understand: being a reporter is so much fun! It is also challenging and fascinating – a craft that can be learned and mastered. In Kid Reporter, they use their great experience as journalists and editors to explain how reporting happens and how you go about ﬁnding and telling great stories. For the student who already loves stories of all kinds, and for parents and teachers who want to encourage curiosity, creativity and skills for life-long learning: Kid Reporter is a wonderful book.’ ― Mark Scott AO, Secretary, NSW Department of Education

‘A great guide to what journalists do, how they do it and why it matters. Worth reading for young and old.’ ―Margaret Simons, freelance journalist and Honorary Principal Fellow, Centre for Advancing Journalism, University of Melbourne