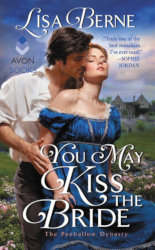 YOU MAY KISS THE BRIDE

B&N BEST BOOK OF THE YEAR

“Berne’s exceptional romance debut, the first in the Penhallow Dynasty series, will dazzle readers with its irresistible mix of graceful writing tempered with

“Berne and the Penhallow Dynasty debut with a near-classic Regency romp…This charmer heralds a bright new voice in the genre.”—RT Book Reviews

THE LAIRD TAKES A BRIDE

Debut Romance, by delivering another triumphant mix of sparkling

“Berne shows a special mastery for characters who hide their feelings,

even from themselves, and yearn, even when they don’t realize it. A

— along with a hefty amount of sensuality — these proud, stubborn

“What a grand, subtle, romantic tour-de-force! The Laird Takes a

Bride is an incredibly arresting tale filled with intelligence,

foreboding, suspense and a beautiful romance. Prepare to be

courtship . . . If marriage-of-convenience is your catnip, you’ll enjoy

THE BRIDE TAKES A GROOM

KIRKUS BEST BOOK OF THE YEAR

BOOKPAGE BEST ROMANCE OF THE YEAR

“An elegant, poignant, and joyful romance and a must-read for

“With perfectly polished prose, a rare gift for creating superbly rendered characters, and a sense of wit that rivals Georgette Heyer at her best, Berne gifts romance readers with the third sterling addition to her not-to-be-missed, Regency-set Penhallow Dynasty series.”—Booklist

“Berne’s light touches of humor (provided by the Penhallow parrot) and realistic dialogue bring the characters and atmosphere of the era to life. There will be a smile on many a reader’s lips by the satisfying HEA.”—RT Book Reviews

ENGAGED TO THE EARL

“The subtle comparison of the quick “love at first sight” romance versus the slow-building, deep-rooted love between characters is lovely and satisfying. Graceful, lyrical, and charming.”—Kirkus

“This expertly plotted love story is a must-read for Regency fans.”—Publishers Weekly

witty, tongue-in-cheek romance. And her choice to tell the story through multiple viewpoints puts the reader in the center of the action, adding to the fast-paced fun.”

THE WORST DUKE IN THE WORLD

“There's no other way to describe this fizzy historical romance

than enchanting. The wry humor and witty banter explode off the

page from the start… It's champagne in book form — bubbly, fun,

and intoxicating far more quickly than one might anticipate. One

her readers in on the gag. But even with the robust humor, the

book is still heartfelt…The Worst Duke in the World is a breezy,

fizzy read that will cut through even the darkest winter doldrums.”

“Filled with endearingly quirky characters, plenty of droll wit, and

a number of clever literary grace notes, including a blink-andyou’ll-

children’s literature ever written, this is a transporting,

“Deftly funny . . . A nice portrait of what courtship is like for a dedicated single parent.”

“A light-hearted, humorous escapade [and] a delightfully fun read. . . . The writing is brilliant, and readers will

thoroughly enjoy The Worst Duke in the World.”

“Jane’s curious combination of naivete and street smarts makes her an endearing heroine, and the romance between

Jane and Anthony is enhanced by witty banter and Wakefield’s mischievous antics. Series fans will be thrilled.”—Publishers Weekly

BOOK 1 – You May Kiss the Bride

In an unforgettable debut, Lisa Berne introduces you to the Penhallow Dynasty—men destined to marry, but hesitant to love. Wealthy

and arrogant, Gabriel Penhallow knows it’s time to fulfill his dynastic duty. All he must do is follow “The Penhallow way”—find a

biddable bride, produce an heir and a spare, and then live separate lives. It’s worked so well for generations, certainly one kiss with the

delectable Livia Stuart isn’t going to change things. Society dictates he marry her, and one chit is as good as another as long as she’s

from a decent family. But Livia’s transformation from an original to a mundane diamond of the first water makes Gabriel realize he

desperately wants the woman who somehow provoked him into that kiss. And for all the ladies who’ve thrown themselves at him, it’s

the one who wants to flee whom he now wants. But how will he keep this independent miss from flying away?

BOOK 2 – The Laird Takes a Bride

Alasdair Penhallow, laird of his clan and master of Castle Tadgh, is forced to end his carefree bachelorhood, thanks to an ancient

decree that requires him to marry. But Alasdair’s search for a biddable wife comes to a screeching halt when Fate serves up Fiona

Douglass. Prickly as a thistle, Fiona challenges him at every turn, rendering herself surprisingly irresistible. Her love would be a prize

indeed . . . if Alasdair could accept it. Fiona gave her heart once and doesn’t plan to repeat that folly. Yet she finds herself drawn to

Alasdair’s intelligence and strength, and the passion he incites goes well beyond her expectations for what’s only a marriage of

expedience. Despite herself, she’s falling in love with her husband. But there’s a high wall between them—and Fiona’s not sure it can

ever be torn down.

BOOK 3 – The Bride Takes a Groom

Katherine Brooke may be a fabulously wealthy heiress, but she’s trapped, a pawn in her parents’ ruthless game to marry her into the

nobility. Then Captain Hugo Penhallow—so charming, as handsome as a Greek god—comes into her life once more, and suddenly

she sees a chance to be free. As a Penhallow, his is one of the highest names in the land, but still his family is facing ruin. So, Katherine

boldly proposes an exchange: his name for her money. But only if Hugo understands it’s merely a practical arrangement, and that she’s

not surrendering herself entirely. Back from eight years in America and determined to give his younger siblings a better life, Hugo

agrees. He’s never fallen in love, so why not? Yet neither of them guesses that this marriage will become far, far more than they ever

BOOK 4 – Engaged to the Earl

Gwendolyn Penhallow, she was a dreamy, strong-willed girl with a wild imagination, and now she’s a beautiful and beguiling young

lady . . . who’s engaged to Society’s darling the Earl of Westenbury. Christopher had fled England to seek adventure elsewhere. Has he

found it here too — the most delightful adventure of his life? Gwendolyn is sure she’s betrothed to the most wonderful man in the

world. But then, shockingly, Christopher Beck shows up. Nobody has heard from him in years — and not only he is very much alive,

he’s also sinfully attractive, blithely unconventional, and disturbingly fun to be with. Which wouldn’t be a problem, except for the fact

that she’s, well, promised to another. And just what on earth is she going to do about it?

BOOK 5 – The Worst Duke in the World

Life’s no bowl of cherries for Anthony Farr, the Duke of Radcliffe. Duty demands he remarry to provide a spare to go along with the

heir — and eligible ladies keep trying to finagle him into a proposal. All he wants is to be a good father to his 8-year-old son, see the

Duchess (his truly terrific pig) win first prize at the harvest fête , and stay single. Even if that makes him a Bad Duke. Maybe the Worst

Duke in the World. Then Miss Jane Kent, a long-lost relation of the illustrious Penhallow family, arrives in the neighborhood and is

promptly befriended by the Duke’s son. Jane, Anthony comes to realize, is smart and fun and also very kissable and dazzlingly

desirable. Still, that’s not enough to melt his resistance to marrying again. He made a stern promise to himself and promises must, of

course, be kept. But what if that’s just his head talking, and his heart . . . is saying something entirely different?