AMERICAN CIDER: A Modern Guide to a Historic Beverage
by Dan Pucci and Craig Cavallo 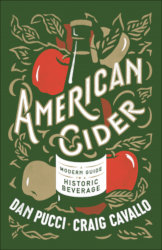 A must-have guide to the booming hard cider industry—

what to drink, where it comes from, and where it's heading--by a pioneering cider sommelier, "the hype man cider is lucky to have" (Eater)

Cider has been getting new attention all over the world. And today’s cider runs the gamut from sweet to dry, smooth to funky, made with apples but also other fruits--and even hopped like beer. In AMERICAN CIDER experts Dan Pucci and Craig Cavallo give a new wave of consumers the tools to taste, talk about, and choose their ciders, along with stories of the many local heroes saving heirloom apples and producing new varieties. Like wine made from well-known grapes, ciders differ based on the apples they're made from and where those apples were grown. Combining the tasting tools of wine and beer, the authors illuminate the possibilities of this light, flavorful, naturally gluten-free beverage.

And cider is more than just its taste--it's also historical, as the nation's first popular alcoholic beverage, made from apples that were originally sailed to the States across the Atlantic from England. Pucci and Cavallo use a region-by-region approach to illuminate how ciders and the apples they're made from came to be, from the well-known tale of Johnny Appleseed--which isn't quite what we thought--to the more surprising effects of industrial progress and government policy.

AMERICAN CIDER is a guide to drinking, but even more so, it is a narrative exploring the world of the consumers, farmers, and fermenters giving one of the oldest beverages a brand new boost and making people feel it is an absolute must-try drink.

Dan Pucci is one of the State’s leading cider experts. He was the founding beverage director at Wassail, New York City's first cider bar and restaurant, and has since traveled the country in a continued pursuit of cider education, awareness, and research. He is a partner in Wallabout Hospitality, a New York City-based consulting and hospitality company.

Craig Cavallo lived in New York City for thirteen years, working in restaurants, blogging about food trends, and writing for Saveur. His work has been published in Condé Nast Traveler, GQ, New York magazine's Grub Street, Thrillist, and Vice Munchies. He left New York City for the Hudson Valley, and when he's not at Golden Russet Cafe & Grocery, the café that he owns and operates with his wife, Jenny, he can be found picking fenceline apples and dabbling in his own cellar cider experiments.

“Sommelier Pucci and food journalist Cavallo impress in this deeply researched account of the history of apple cider. . . . This fascinating guide will appeal to history buffs and imbibers alike.”—Publishers Weekly

“American Cider is not just a thorough guide to the history of apples and cider in this country; it is an inspiring survey of the orchardists and cidermakers alive today who are devoting their lives to pomaceous diversity, agricultural sustainability, and a fairer food system for all.”—Alice Waters, owner of Chez Panisse, founder of The Edible Schoolyard Project

“Starting five hundred million years ago and continuing through to the tasting rooms of today, American Cider meticulously explores each branch of cider’s family tree. Pucci and Cavallo are thorough and enthusiastic chroniclers, who celebrate cider’s pomologists and pioneers with infectious curiosity and passion.”—Bianca Bosker, New York Times bestselling author of Cork Dork

“For years, American craft cider has been one of the most dynamic players on the contemporary beverage scene, a delicious and distinctive drink seemingly appearing from nowhere, but as Dan Pucci and Craig Cavallo show, cider and America have been deeply entwined for more than four hundred years. Until now, we’ve had only glimpses of this story, but American Cider puts it all together, weaving history, botany, anthropology, and insight into the first comprehensive account of what American cider is and how it got that way. This is an essential volume for anyone wishing to navigate the extraordinarily diverse landscape of contemporary cider, but it is much more than that. By tracing the human and natural forces at work over four centuries, Pucci and Cavallo provide a new context for understanding how America has shaped cider—and, in so doing, a new way for understanding America.”—Rowan Jacobsen, author of Apples of Uncommon Character and A Geography of Oysters

“Whenever I’ve had questions about cider, Dan Pucci has long been my first stop for expertise. Now he can be everyone’s go-to expert, thanks to this thorough, comprehensive guide on ciders and the apples used to make them.”

“American Cider is a deeply researched road map to modern cider's revival, reminding readers why well-made cider should always be the apple of drinkers’ eyes. All too often, cider is seen as the sugary stuff that's sold by the juice box. Cider evangelists Pucci and Cavallo take readers on a centuries-spanning journey from colonial America's historic orchards to today's visionary makers that are spearheading the juiced-up cider revival. After reading American Cider, you'll never eye an apple the same way again.”—Joshua M. Bernstein, author of The Complete Beer Course and Drink Better Beer