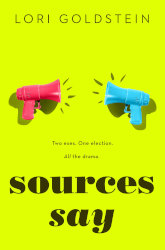 SOURCES SAY, an incisive and timely Young Adult novel that looks at the rise of fake news and how social media is increasingly playing a role in elections.

Two exes. One election. All the drama.

At Acedia High School, student council has always been nothing more than a popularity contest. Nobody pays attention. Nobody cares.

But all that changes when the Frankengirls show up. During the very first week of school, someone plasters the halls with Photoshopped images of three "perfect tens" -- images of scantily clad girls made from real photos of girls at school. The student body is livid. And the two presidential candidates, Angeline Quinn and Leo Torres, jump on the opportunity to propose their solutions and secure votes. After their messy breakup, Leo and Angie are fighting tooth and nail to win this thing and their constituents are mesmerized as they duke it out.

As if things couldn't be more dramatic, the school's two newspapers get involved. The Red & Blue is run by Angie's sister Cat and she prides herself on only reporting the facts. But her morals are tested when The Shrieking Violet -- written by an anonymous source and based less on facts and more on fiction -- blatantly endorses Leo.

Rumors fly, secrets are leaked, and the previously mundane student election becomes anything but boring.

SOURCES SAY provides an incisive look at elections and media in the microcosm of a high school, but it is so much more than that. It is a story of finding your voice, of sisterhood, of coming together to work toward a path forward in turbulent times.

Lori Goldstein is the author of SCREEN QUEENS, which sold in Turkish to Marti. Penguin Young Readers looks after those rights.

"In fact, Sources Say might just be the best book I’ve read this year. No, wait, let me take the might out. It definitely is."

"A timely and smart novel that examines the pernicious effects of fake news, and what it means to be a feminist, and even better, a sister. Lori Goldstein knows the teenage girl's heart."

"If there was ever a book for our time, this is it! Scandal, drama, romance, and fake news collide in this fun, clever, fast-paced read. Come for the intrigue, stay for the realistic characters who are just as flawed and fascinating as they are fearless." - Jessica Brody, bestselling author of The Chaos of Standing Still

"A whip-smart, razor-sharp foray into school politics, friendship, family, and the nature of female ambition. Sources Say is savvy, heartfelt, and so very timely." Laurie Elizabeth Flynn, author of Firests, Last Girl Lied To, and All Eyes on Her

"Taking on the issues of our current media-driven political landscape is no easy feat, but one Lori Goldstein accomplishes with a deft hand. Sources Say touches on everything from sexist school policies to the way truth can be twisted to fit a specific agenda. But rather than rehashing old news, Goldstein shows readers a new way forward. This book is at once a cautionary tale, a political thriller, and a coming of age novel. Unflinching and timely."

"Lori Goldstein has written a novel that is both relevant and remarkable and cleverly mirrors what is happening in our society today...a little romance, a little mystery, and a whole lot of substance."

"A must-read in a current social climate that is more digitally connected and socially engaged than ever before!"