SOMEONE ELSE'S SECRET
by Julia Spiro 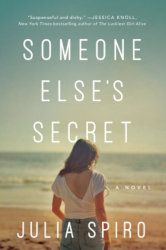 The novel has been optioned for Feature by Producer Denise Di Novi!

Reached over 150,000 readers since its release through the Amazon First Reads program on June 1, 2020

New Reviews for the Book

“A plot that keeps you guessing . . . an ominous trauma that can set your teeth on edge with the tension it creates . . . Spiro so viscerally renders Georgie’s feeling of awkward adolescent alienation as she tries desperately to be part of the older crowd that you might cringe with memories of what that stage of life felt like.” – Martha’s Vineyard Times

“The stage is thus very neatly set for a sweet, sun-drenched summer-on-the-Vineyard novel but Ms. Spiro has other, darker ideas in mind. The combined forces of lust, envy, conspiratorial scheming and townie resentment are churning just under the surface at all times, culminating in an incident at a lighthouse that will reverberate in the lives of both Lindsey and Georgie . . . There is personal and emotional wreckage between them that needs courage and self-honesty to clear away.” – Vineyard Gazette

From a powerful new voice in fiction, and perfect for fans of MY DARK VANESSA, SOMEONE ELSE'S SECRET is an exploration of female friendship, family, first love, the cost of ambition, and the courage to speak the truth in the #MeToo era. The novel tells the story of two young women who are thrown together by circumstance one fateful summer on Martha's Vineyard, and are forever bonded by a terrible, shared secret. SOMEONE ELSE’S SECRET was released by Lake Union Publishing on July 1, 2020.

Over 100 5-star customer reviews on Amazon.com

Someone Else's Secret by [Spiro, Julia]

Letter from the Editor

When the #MeToo movement went viral, I remember feeling heartbroken and yet unsurprised by what was being posted, by the sheer scope of it all. And while I admired those brave enough to come forward, I remember being unsure if I’d share my own story.

Debut novelist Julia Spiro’s Someone Else’s Secret brought that feeling of uncertainty rushing back for me. Her powerfully poignant and expertly crafted novel made me stop to consider the many reasons victims of any violence may choose to keep silent—the pain, the shame, the fear of consequences, the cases that never see justice, to name just a few. Through Lindsey and Georgie’s fateful summer spent on Martha’s Vineyard, a summer that began optimistically with bonfires and budding friendship, I witnessed how easy it can be to find oneself in a difficult situation, and how hard it can be to speak up or to remain silent about something so big, and how heavy those secrets can weigh on a person.

Someone Else’s Secret hurt my heart, but it also left me with hope. Hope that human connection and the support of loved ones can help a survivor through the darkest of times. And hope that despite all of that darkness out in the world, the illuminating light of truth will find its way through, and soon there will be no place left for it to hide.

Reviews for the Book

“Suspenseful and dishy, Someone Else’s Secret exposes the dark underbelly of a moneyed summer town and the lengths one outsider will go to belong. Spiro brings Martha’s Vineyard to life with delicious precision; I felt like I was there with my toes in the sand, a glass of rosé in my hand, and plenty of reasons to look over my shoulder. If the walls in these summer estates could talk, they would say, ‘Trust no one.’” —Jessica Knoll, New York Times bestselling author of Luckiest Girl Alive

“Someone Else’s Secret is a sandy, sun-soaked, character-driven exploration of what happens when there are no good options, when the truth turns out not to be enough, when following your heart proves impossible. It is a novel about being young and very young and then not so young after all and about finding the strength to fight for all those former selves.” —Laurie Frankel, New York Times bestselling author of This Is How It Always Is

“From a fresh voice in fiction, this poignant and timely novel explores the strength and nuance of female friendship, the cost of ambition, and the courage it takes to speak the truth… unputdownable!” – Frolic

“This one starts out as a breezy beach read, then gets real dark, real quick.” – Betches

“Someone Else’s Secret explores the realities of young love, coming-of-age, and the traumatic events women often face. Julia Spiro handles these difficult issues gracefully by pulling us into her fictional journey but also elevating the voices of women everywhere who are sure to recognize a part of themselves along the way.” —Wendy Walker, national bestselling author of The Night Before

“In Someone Else’s Secret, debut author Julia Spiro has crafted a timely exploration of the weight of secrets and what it takes to tell the truth. When an ambitious recent college graduate lands a ‘cushy’ job among the elite of Martha’s Vineyard, she gets an unwelcome lesson on the dark side of power and privilege. A compelling and cautionary tale that pulses with authenticity.” —Karen Dukess, author of The Last Book Party

“Someone Else’s Secret is a gorgeous debut that, from page one, sets itself apart from the rest…Julia Spiro has written a story that is truly a breath of fresh air. The layered plot and rich cast of characters plunge the reader into a masterful story of secrets, ambition, and the fragile bonds of friendship. Someone Else’s Secret is perfect for book clubs and should be on everyone’s summer 2020 list.” —Liz Fenton & Lisa Steinke, bestselling authors of The Two Lila Bennetts

“In Someone Else’s Secret, Julia Spiro weaves a relatable, heart-wrenching tale full of secrets, lies, denial, and redemption. A dizzying dance with the truth for fans of Kristin Hannah and for women everywhere.” —Rea Frey, author of Not Her Daughter and Because You’re Mine

“Someone Else’s Secret is at once an arresting work of storytelling and a page-turning exploration of the violent power dynamics that weave throughout Martha’s Vineyard and other glamorous summertime retreats. I was left haunted, moved, and in awe of Julia Spiro’s taut prose. A propulsive riptide of a book.” —John Glynn, author of Out East: Memoir of a Montauk Summer

“Engaging and perceptive, Someone Else’s Secret uses the sunny idyll of Martha’s Vineyard as the backdrop for a coming-of-age story about two women navigating class, desire, and the things that go unspoken.” —Sam Lansky, author of The Gilded Razor

Here’s the thing about secrets: they change shape over time, become blurry with memory, until the truth is nearly lost.

2009. Lindsey and Georgie have high hopes for their summer on Martha’s Vineyard. In the wake of the recession, ambitious college graduate Lindsey accepts a job as a nanny for an influential family who may help her land a position in Boston’s exclusive art world. Georgie, the eldest child in that family, is nearly fifteen and eager to find herself, dreaming of independence and yearning for first love.

Over the course of that formative summer, the two young women develop a close bond. Then, one night by the lighthouse, a shocking act occurs that ensnares them both in the throes of a terrible secret. Their budding friendship is shattered, and neither one can speak of what happened that night for ten long years.

Until now. Lindsey and Georgie must confront the past after all this time. Their quest for justice will require costly sacrifices, but it also might give them the closure they need to move on. All they know for sure is that when the truth is revealed, their lives will be forever changed once again.

From a fresh voice in fiction, this poignant and timely novel explores the strength and nuance of female friendship, the cost of ambition, and the courage it takes to speak the truth.

Julia Spiro was born and raised in Boston, Massachusetts. After graduating from Harvard College, she lived in Los Angeles and worked in the film industry for nearly a decade. She now lives year-round on Martha’s Vineyard. Someone Else’s Secret is her first novel.