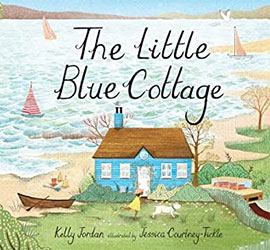 A timeless and universal tale that celebrates the bond created between a little girl and the special place she returns to year after year—and how their relationship changes as she grows up.

C:\Users\wphillips\Dropbox (Macmillan Publishers)\backup-PC\Downloads\9781624149238_FC (1).jpgThe little blue cottage waits each year for summer to arrive—and with it, the girl. Through sunny days and stormy weather, the cottage and the girl keep each other company and wile away the long days and nights together. Until one year, and then another, the cottage is left waiting and empty season after season.

In this heartfelt story about change, Kelly Jordan’s lilting text and Jessica Courtney-Tickle’s lush art captures the essence of cherishing a favorite place.

Kelly Jordan has a journalism degree from the University of Georgia and spends her days as a communications manager and magazine editor. She lives with her husband in Decatur, Georgia, and regularly visits her family’s little blue cottage in Florida. This is her picture book debut.

Jessica Courtney-Tickle studied illustration and animation with a focus in children’s picture books at Kingston University. A freelance illustrator, she especially loves creating nature scenes. She lives in Cambridge, UK.

Praise for The Little Blue Cottage:

“Evoking Virginia Lee Burton’s The Little House, this sweet story is told from the perspective of a blue bayside cottage…The vintage-style artwork is charming, offering heartwarming scenes of family life that mix single-page illustrations with horizontal strips that trace action or the passage of time. Occasional lapses in the text’s meter and rhyme don’t detract from the comforting lull of this story’s perennial messages of love and home.” —Booklist

“The cottage’s personification adds a touch of magic to this ode to a beloved refuge.” —Publishers Weekly

Like a cottage quilt, rhythmic stanzas and vintage-style illustrations are stitched together with memories and love.

Lyrical, not-quite-rhyming text tells the simple yet touching story of a girl with brown skin and straight, black hair who visits a special blue cottage every summer with her interracial family. Shared activities (waterskiing, beach play, and cycling) and meals (pancakes) convey the closeness in this family. In the summer, the girl escapes the warm cottage to play on the beach; during torrential storms, she hides within the cottage walls, peering out at the high whitecaps. The cottage, serving as a secondary character, awaits the girl’s return each year, as well as the sights, sounds, and smells that accompany her visit. Alternating between vignettes and broad spreads, illustrations that recall the stylings of Virginia Lee Burton and Barbara Cooney have the texture and appearance of colored pencil. Muted earth tones dominate, and prints and patterns also adorn each thoughtfully composed spread, adding to the layered visual appeal of the book. Eventually the girl grows up and no longer visits, and the cottage falls into neglect, nearly disappearing into the surrounding vegetation. The book ends as it began, with a second multiracial generation returning to the little blue cottage, to restore its timeless splendor and build new memories.

A story of a girl, a cottage, and a family tradition that begs to be visited again and again.