OTHER PEOPLE'S PETS
by R.L. Maizes 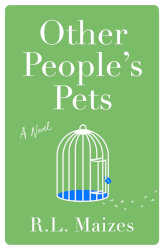 La La Fine relates to animals better than she does people. Abandoned by a mother who never wanted a family, raised by a locksmith-turned-thief father, La La looks to pets when it feels like the rest of the world conspires against her

La La’s world stops being whole when her mother, who never wanted a child, abandons her twice. First, when La La falls through thin ice on a skating trip, and again when the accusations of “unfit mother” hit too close to home and she disappears for good. Left alone with her father—a locksmith by trade, and a thief in reality—La La is denied a regular life. She becomes her father’s accomplice, calming the watchdog while he strips families of their most precious belongings.

Now La La is trying to put that life behind her. Studying to be a veterinarian and engaged to the steady and reliable Clem, La La is looking to build an honest life. But when her father’s luck runs out and he is arrested for burglary, everything La La has painstakingly built unravels. In her fourth year of veterinary school, she drops out, leaving school to pay for her father’s legal fees the only way she knows how—robbing homes.

As an animal empath, she rationalizes her theft by focusing on houses with pets whose maladies only she can sense and caring for them before leaving with the family’s valuables. The news reports a puzzled police force—searching for a thief who left behind medicine for the dog, water for the parrot, or food for the hamster. But while she may be helping other people’s pets, her own relationships suffer, and when La La’s father flees custody, becoming the last in a long line of people who have left her, La La must take stock of her life and come to terms with what matters most.

Other People’s Pets examines the gap between the families we’re born into and those we create, and the danger that holding on to a troubled past may rob us of the future.

R.L. Maizes was born and raised in Queens, New York, and now lives in Boulder County, Colorado. Maizes’s short stories have aired on National Public Radio and have appeared in the literary magazines Electric Literature, Witness, Bellevue Literary Review, Slice, and Blackbird, among others. Her essays have been published in The New York Times, The Washington Post, Lilith, and elsewhere. Maizes is an alumna of the Bread Loaf Writers’ Conference, the Sewanee Writers’ Conference, and the Tin House Summer Writer’s Workshop. Her work has received Honorable Mention in Glimmer Train’s Fiction Open contest, has been a finalist in numerous other national contests, and has been nominated for a Pushcart Prize. We Love Anderson Cooper: Short Stories is her first book.

Early praise for Other People’s Pets:

“Maizes keeps the narrative anchored in reality, with believable details about the mechanics of a burglar’s life and a large cast of well-rounded characters. This is a beguiling twist on the familiar formula of breaking unhealthy bonds with the past.” —Publishers Weekly

“While its quirky combination of fictional elements and adroit, deadpan writing give the novel a wryly comedic atmosphere, La La’s story is melancholy and moving. An uncanny, appealing blend of suspense, irony, tragedy, and how-to for lock-picking, burgling, and ankle monitor removal.” —Kirkus

“While reading R.L. Maizes’ Other People’s Pets, I could not stop saying, as La La mouths to herself at one point, remarkable. Every time the novel opened up yet again to reveal some new depth, much like La La and her ability to experience the emotions of the animals around her, I worried how the novel could hold such wonder without bursting, could control the pain and joy of this remarkable story. But Maizes possesses such magic. This examination of family, across all lines and definitions, will open you up in such necessary, beautiful ways.” —Kevin Wilson, author of Nothing to See Here and The Family Fang

La La Fine is an animal empath extraordinaire finally enjoying a stable life. She is in veterinary school and lives with her devoted fiancé, Clem, a chiropractor, and their loving animals, Black and Blue. But her complicated childhood catches up with her, derailing all she holds dear. Long abandoned by a cold mother who walked away while La La was drowning in an icy pond and raised by Zev, the locksmith/thief father who taught her his trades, she is drawn back into his drama when he is arrested for breaking into a home, which causes the elderly owner to tumble down the stairs—a fall he may not survive. La La takes on Zev’s attorney’s fees, using her empathic gifts and her housebreaking skills to steal from homes that also house animals in distress. No good can come from this plan.

VERDICT Following Maizes’s story collection, We Love Anderson Cooper, this debut novel brings to life a wholly original, deeply charming, and seriously flawed character whose enormous heart leads her into a mess of trouble. A beguiling tale that will make readers want to leap into the pages to save La La from herself before it’s too late.