MODERN FAMILY: The Untold Oral History of One of Television's Groundbreaking Sitcoms
by Marc Freeman 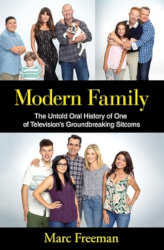 An oral history, with the full participation of cast and crew, of one of the most popular sitcoms in television history.

C:\Users\mficke\Dropbox (Macmillan Publishers)\backup-PC\Downloads\9781250260031_FC.jpgSince premiering in 2009, the groundbreaking television sitcom Modern Family has garnered tens of millions of devoted fans, earning 75 Emmy nominations and 22 Emmy Awards, including five in a row for Outstanding Comedy Series (one of only two sitcoms to ever achieve that feat). Professors have written about it. Psychologists have lectured on it. Leading publications, such as The New York Times and Washington Post, have explained their love for it. With funny, heartfelt and relatable stories about family, Modern Family has gained a worldwide following of hundreds of millions of viewers in countries as diverse as England, Israel, The Netherlands, Germany, and South Africa.

As much as people love the show, few know the stories behind it. How did a kernel of an idea by Emmy-winning writers Steve Levitan and Chris Lloyd morph into a television juggernaut? Where did they find the cast? How did they come up with story ideas and film favorite episodes? What went on behind the scenes? Up until now, there have been individual stories and interviews about the show, but nothing comprehensive that captures the complete story of the series.

Modern Family: The Untold Oral History of One of Television’s Groundbreaking Sitcoms is the only major book ever written that explores this show as told by those who created it. More than seventy people, including the entire cast, crew, and creators, detail the full history of this iconic sitcom. Readers get to go behind the scenes and experience the show like never before, including personal photos. They’ll also discover the never-told fallout and divorce of the two showrunners, making the show two separate series blended into one. Even people unfamiliar with the show will gain deep insight into what it takes to put a series on television.

From script development to final season (the upcoming 11th season will be the show's last) readers will get a glimpse of the cast’s relationships with each other and the emotions attached to saying goodbye to the best and longest-running workplace many of them expect to ever experience. Much like the series itself, this book shares a story of family, of conflict, and of collaboration, that went into this timeless, groundbreaking series.

MARC FREEMAN is a freelance writer for publications including Vanity Fair, The Hollywood Reporter, and Slate. He has written a series of critically acclaimed oral histories on many groundbreaking television shows, including M*A*S*H, Frasier, and The Smothers Brothers Comedy Hour.

Please note: the book contains two 16-page color photo inserts, which are not included in the .pdf.

*Included on Entertainment Weekly’s Must List in their June issue*

“A glossy look behind the scenes and a satisfyingly ample memento for fans.”—Kirkus Reviews

“This definitive guide to the show answers every question a fan could pose, by quoting the people who created it.”—Library Journal

“The book reveals how much work went into each half-hour episode and offers some fun insight. A top show that though over, lives on in the book.”—New York Daily News

“I gave the best years of my life to Modern Family. Let’s hope Freeman doesn’t f&%k this up. Crap, I swore again. Sorry, Rico….Marc really tells the story of Modern Family in an interesting and fun way, filled with fascinating details but never gossipy. Very candid and incredibly readable.”—Julie Bowen, actor, Claire Dunphy

“Holy shit! This is a remarkable window into TV history. It’s as if I was there. And then I remember, I was there!”—Bill Wrubel, writer and executive producer

“I have so many wonderful memories from working on Modern Family, but 11 years is a long time and I am certainly never going to remember every wonderful moment. I am so grateful to Marc for taking the time to put together this cohesive, entertaining and moving account of what has been the best job of my career thus far.” —Jesse Tyler Ferguson, actor, Mitchell Pritchett

“How can I not like this? Great job. I love the cutting in and out of the different people. The different perspectives. Couldn’t be better.”—Ed O'Neill, actor, Jay Pritchett

“I truly enjoyed reliving the show through Marc’s insightful questions and his investigation of what made our show special.”—Ty Burrell, actor, Phil Dunphy

“Taking a walk down memory lane with Marc has been both fun and melancholy. It’s hard to believe the job I dreamed of getting for 12 years and had the pleasure of doing for 11 is now over. But hey! Chin up!! This book will help us all feel happy again as we relive the show from the beginning.”—Eric Stonestreet, actor, Cameron Tucker