PLAYING FOR KEEPS: Michael Jordan and the World He Made
by David Halberstam 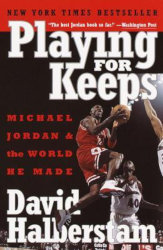 “A writer should be like a playwright — putting people on stage, putting ideas on stage, making the reader become the audience.”—David Halberstam

“What David Halberstam delivers--and what the reader has come to expect from Halberstam—is insight, balance, analysis.”—The New York Times

“As astute and objective an examination as we’re likely to get of the rise and professional career of basketball and media superstar Michael Jordan.”—Kirkus Reviews

With the success of the ESPN and Netflix documentary miniseries, THE LAST DANCE, about the career of sports icon Michael Jordan, this is a great time to remind our publishing friends around the globe about Random House’s New York Times bestseller, PLAYING FOR KEEPS by Pulitzer prize-winning journalist David Halberstam.

THE LAST DANCE was released by ESPN globally via Netflix in many markets starting on April 20, 2020 including: Brazil, Germany, Mexico, Italy, UK, France, Hungary, the Netherlands, Spain, and will be released in Russia, Taiwan, Japan, Greece, and Poland and other markets TK. There are two more episodes to be released Sunday in the States and Monday everywhere else. It is one of the most talked about items on social media.

PLAYING FOR KEEPS captures the full measure of Michael Jordan’s epic career, which remains one of the greatest American stories of our time. A compelling narrative, filled with anecdotes and insights, this book chronicles the forces in Jordan’s life that have shaped him into history’s greatest basketball player, and gives readers a front row seat behind the controversial adversity the Chicago Bulls faced within its own franchise, plus the teams and cast of NBA Hall of Famers-- Larry Bird, Isiah Thomas and Magic Johnson-- they had to overcome on their journey to six NBA Championships. Rich with his signature style of creating incisive, carefully woven human portraits of major figures, PLAYING FOR KEEPS, delivers a well-researched, dissection into the building of an American sports icon and it’s effect on fame in America—what forces create it and its consequences.

David Halberstam won the Pulitzer for International Reporting for his coverage of the Vietnam War, as a staff writer for The New York Times. He was also the bestselling author of twenty books, including THE BEST AND THE BRIGHTEST, his critically-acclaimed book on the origins of the Vietnam War, THE BREAKS OF THE GAME, 1981 Ballantine sports book about the Portland Trailblazers, and THE SUMMER OF ’49, his book about the 1949 Pennant race between the Boston Red Sox and the New York Yankees. As a journalist, Halberstam has won just about every journalism award there is for his meticulously-researched coverage on history, politics, the Civil Rights Movement, and American culture. He passed away in April 2007.