CONVINCE ME
by Nina Sadowsky 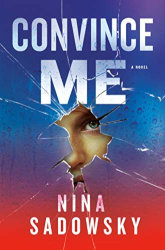 He was the perfect husband, son, and friend.

He was also a perfect liar.

Justin Childs is handsome, likeable, smart. A devoted son to his mother, Carol; a loving husband to his wife, Annie; and a surefooted, savvy business partner to his best friend from college, Will. To so many, the perfect man.

When Justin's body is retrieved from the wreckage of a car accident, his death leaves his loved ones with more questions than answers. In the weeks before, he had been acting strangely--Annie suspected Justin was having an affair, Will assumed it was the pressure of their company's launch--but it was nothing his promises and assurances couldn't fix. But with Justin gone, the cracks begin to show: a secret apartment, disturbing discrepancies in the company's financials. And the woman Annie thought he was sleeping with? She's been missing for a week.

As the lies and secrets pile up, Annie, Carol, and Will realize their beloved Justin was not the man they thought he was. When the police come knocking on Will's door to ask about the missing woman, it looks like Justin may be trying to lay his dark secrets at Will's feet. One final lie from beyond the grave.

A charismatic man's death leaves his family asking questions and exposing secrets, revealing the the man they loved as an unrepentant pathological liar in this explosive thriller from film producer and author Nina Sadowsky.

Nina Sadowsky has written numerous original screenplays and adaptations for such companies as The Walt Disney Company, Working Title Films, and Lifetime Television. She was the executive producer of The Wedding Planner, has produced many other films, and was president of Meg Ryan's Prufrock Pictures. Sadowsky is the Los Angeles program director for New York University's Global Programs initiative, serving the Tisch, Steinhardt, Stern, and Gallatin schools. This is her fourth novel, following JUST FALL (2016), THE BURIAL SOCIETY (2018), and THE EMPTY BED (February 2020).

This is Nina Sadowksy’s best book yet! It is a chilling look at what makes a sociopath in an age of untruth and a high octane, surprising read to its very last page.