THE HACKER'S KEY
by Jon Skovron 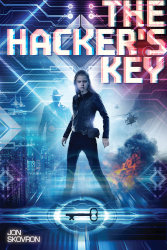 Jon Skovron's debut middle grade, THE HACKER'S KEY, a fast-paced spy thriller in the vein of Alex Rider about a girl raised by a criminal mastermind who must use her unique skill set to locate a dangerous weapon and keep it away from government agents and villainous syndicates alike.

Ada Genet's father, Remy Genet, was one of the most infamous criminals in the world, specializing in infiltration, theft, and cybercrime. For as long as Ada could remember, she had been his accomplice. She helped him steal secrets from governments, weapons from terrorists, and money from just about everyone.

But the law finally caught up with them after they brazenly infiltrated the Pentagon. Her father ended up in prison and Ada ended up at a military boarding school, a ward of the US Federal Government.

Now something called the Hacker's Key has been stolen from a secret UN installation. This Key could supposedly shut down every computer, smartphone, and internet-connected device simultaneously, causing mass chaos around the world. A TechnoDoomsday.

The government thinks Ada's father has something to do with the theft, though he has been in prison this whole time. So when Remy refuses to speak to anyone but his daughter, Ada is drawn back into a web of crime.

Because while her father may not have stolen the Hacker's Key, he might know who did, and now Ada must race around the globe to stop them, all while avoiding the government agents on her tail. If she fails, it will spell disaster not just for her, but for the entire globe.

THE HACKER'S KEY is a fast-paced adventure with a STEM focus that takes readers from Washington, D.C. to Reykjavik to Prague, perfect for fans of Ally Carter and the Alex Rider series.

This is Jon Skovron's first middle grade novel. He is the author of the Empire of Storms trilogy, as well as the forthcoming RANGER OF MARZANNA and the critically acclaimed Young Adult novels MISFIT, MAN MADE BOY, and THIS BROKEN WONDROUS WORLD.

Jon Skovron's skills translate beautifully to Middle Grade. Frequently praised for his wonderful characterization and gift for writing action, he brings both those things to THE HACKER'S KEY, a novel that is fun and accessible while still asking meaningful questions about technology, and how to be your own person when parents -- and society -- expect you to be someone else.

Scholastic will publish in September 2020.