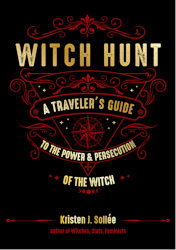 personal guide to the witch trials in Western Europe and America and how their legacy continues to effect women today.

A confluence of political, economic, and religious factors in the early modern era inspired witch hysteria to ignite like wildfire in Italy, France, England, and Northern Europe, which would then go on to follow early colonists into America. At the heart of these accusations were warped ideas about the supposed evils of female sexuality and the female body. Women were often named as the driving force behind the influx of “witches” in these communities, and they were disproportionately punished for it.

The European and American witch hunts between the 15th -17th centuries are usually glossed over in American schools, although this time period greatly informs our ideas about who and what witches are. This lineage of oppression remains an important and often overlooked reference point through which we can contemplate women’s rights—and human rights—in the Western world and beyond.

In Witch Hunt, Kristen Sollée, a second-generation witch herself, retraces the steps of the famed witch hunts of Europe and America, taking the reader on a journey that is both darkly grim and empowering, even joyful. This heathen’s guide to this history is also often irreverent and playful though nevertheless written with reverence for those who suffered through the darkest of times.

Witch Hunt isn’t only an exploration of the horrors of history, but also surveys how the archetypal witch has been rehabilitated.

Kristen J. Sollee is a writer, curator, and educator exploring the electric intersections of art, sex, and culture. She has written for mainstream and academic publications including The Huffington Post, NYLON, Time Out New York, BUST, and lectured at colleges and conferences across the US and Europe.

She is also the founding editrix of Slutist, a sex positive feminist website, and a lecturer at The New School. Her critically-acclaimed book, Witches, Sluts, Feminists, was published by Stone Bridge Press in the summer of 2017, and received accolades in The Guardian, NYLON, BUST, and more.