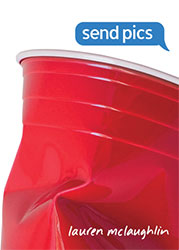 Two weeks will change everything in the lives of a group of teens.

Nikki is known at Jonesville High as being a "mean girl." Fine by her, as she has her close friends--and the new girl, Suze, who has caught the eye of the school's star athlete, Tarkin Shaw.

Then, at a party one night, Shaw drugs Suze, takes photos of her, and uses them to blackmail her.

Wary of going to Nikki -- who has her own troubled history with Shaw -- Suze turns to Marcus, a budding reporter for the town paper, and his best friend DeShawn, a big-hearted outsider, to help her break into Shaw's house and get rid of the photos. But their mission goes horribly wrong, and the next morning Shaw is found dead, and the police suspect foul play.

Now Nikki, Suze, Marcus, and DeShawn must guard their secrets. The clock is ticking, and the truth could cost them everything...but is the truth negotiable when the punishment fits the crime? Who will take the fall before it all catches up to them?

With SEND PICS, Lauren McLaughlin expertly navigates the ripple effect that assault and trauma can have on a person and a community, and confronts the painful truths of being a victim in a world that wants girls to believe they bring these things onto themselves. The novel is a smart page-turner that is as deep as it is riveting, and all too timely.

Dottir Press will publish in April 2020.

"A close look at sexual coercion, cyberbullying, and other perils of surviving high school jock culture. The story hinges around the close-knit trio of Nikki, Ani, and Lydia, who welcome the attractive, worldly new girl Suze into their fold. Two best friends and outsiders, DeShawn and Marcus, catch wind of a rumor when a photo circulates revealing Suze, looking drugged, being carried from a party by her friends. DeShawn, empath and gifted tech whiz, intuits that something is wrong while snarky, budding journalist Marcus senses a story. Tarkin, king of the Jonesville jocks, has nude pictures of Suze, and he blackmails her into dumping her friends and becoming his girlfriend. Suze sets out to settle the score, enlisting DeShawn for backup. Things go from bad to worse when DeShawn becomes a suspect in a serious crime. The quick assumption of DeShawn's guilt exposes the injustices and life-threatening realities he faces as an African American young man while indifferent administrators do little to protect students from harm (Ani is Indian American while Nikki, Lydia, and other major characters are white). Readers glimpse the inner workings of racism in criminal justice procedures, gender-based double standards, sexual coercion, diminishing privacy, and cyberbullying. In exploring and exposing interlocked oppressions, readers will grapple with intriguing twists on a rape revenge story, although the relationship between homophobia and sexism is not meaningfully explored. A gritty read for a woke generation." - Kirkus

Translation rights have sold in Estonian to Postimees.