THE BANK
by Bentley Little 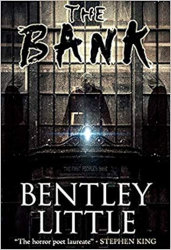 It’s hard to think of a more positive endorsement for THE BANK!:

"I just got an advance copy of the new Bentley Little novel, THE BANK, and it goes right to the top of the pile. Mr. Little writes horror novels unlike anyone else. He's so damn good he's practically his own genre." - 9:46 PM · Jan 17, 2020·Twitter Web App

And while we are thinking of Mr. King, let’s not forget his earlier endorsement for Bentley Little’s work, attached. So is the book, which I sent you in October.

"We know who you are! Can your current bank say that? We pride ourselves on providing unparalleled service to all of our customers. We're looking forward to banking with YOU!"

In the small town of Montgomery, Arizona, Kyle Decker's book shop is barely breaking even. When a bank opens in the empty storefront next door, he hopes the new establishment will bring in more foot traffic. Trouble is, nobody has ever heard of The First People's Bank, and the local branch has appeared mysteriously overnight. Their incentives for new customers seem reasonable... at first. But is it a coincidence when Kyle's wife has her identity stolen, and his son receives emails that seem to know his private thoughts? Or when the manager of a competing financial institution dies a gruesome death?

Soon, if people in Montgomery, Arizona, want to buy a new car or home, or if they need a small business loan, they have no choice but to work with The First People's Bank. As The Bank makes increasingly bizarre demands on its customers, it becomes clear the town may be in too deep... and the penalty for an early withdrawal is too terrifying to imagine.

With his latest original novel, Bentley Little's dark, razor-sharp satire takes on the worst practices of our banking industry, and you'll never look at your loan officer the same way again.

Bentley Little is an American author of numerous horror novels. He was discovered by Dean Koontz.

Little was born one month after his mother attended the world premiere of Psycho. He published his first novel, The Revelation, with St. Martin's Press in 1990. After reading it, Stephen King became a vocal fan of Little's work, and Little won the Bram Stoker Award for "Best First Novel" in 1990. He moved to New American Library for his next two novels, but was dropped from the company after he refused to write a police procedural as his next novel. He eventually returned to New American Library, with whom he continues to publish his novels.

Little has stated on several occasions that he considers himself a horror novelist, and that he writes in the horror genre, not the "suspense" or "dark fantasy" genres. He is an unabashed supporter of horror fiction and has been described as a disciple of Stephen King.