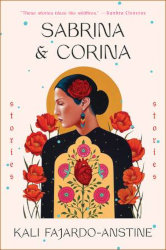 “In Fajardo-Anstine’s beautiful debut collection, set largely in Denver, CO, she dexterously explores what it means to be Latina, indigenous, and female in ways both touching and powerful...These stories are stirring meditations on the lives of Latinas of indigenous ancestry; Fajardo-Anstine’s collection is vividly alive with the love and pain of its characters, while echoing with the spiritual power of their pasts.”

“I haven’t had time to read many collections this year, but I’ve found time to read and re-read Sabrina & Corina, by Kali Fajardo-Anstine. It is a beautiful, masterfully written collection of multi-generational stories featuring Chicana characters in Colorado, and each story reads like the best chapter of a novel—I love when I can say that about a work of art that is so committed to the humanity, culture, and familial love of a people to whom dominant narratives have often spoken over. Read this book.”

“Each story showcases Fajardo-Anstine’s mastery of prose and the vulnerability of her characters. A timely classic in the making, Sabrina & Corina is a crucial read.”

“Fierce and essential stories…In the title story, a cosmetician prepares her cousin’s body for burial while tracing her descent into the grave alongside the decline of their friendship. They had once been so close they had argued about which of them had actually felt the pain of a bee sting in their shared earliest memory. As teenagers they had studied their reflections in the full-length mirrors hanging on the four walls of their grandmother’s bathroom…The image of the two girls observing themselves in their grandmother’s mirrors, and hoping to emerge somehow as women in control of how the world perceives them, would seem to represent the feminine agency, legacy and kinship that govern the hearts of every character in this book.”

“In the 11 stories of Sabrina & Corina, Fajardo-Anstine writes a love letter to the Chicanas of her homeland — women as unbreakable as the mountains that run through Colorado and as resilient as the arid deserts that surround it…In her fierce, bold stories, these women — and she — are seen, and heard, and made known; the collection is both a product of pain and a celebration of survival…Like the woman on Sabrina & Corina's cover, the hearts of these characters are exposed but intact. Fajardo-Anstine's heart is there on the page, too, beating with the blood of her ancestors.” –Bustle

“Fajardo-Anstine’s gritty and tender debut gives voice to so many women whose stories are rarely heard, and that’s another way the book’s title functions—to announce upfront whose stories these are.” –Fiction Writers Review

“You will clutch your heart reading Kali Fajardo-Anstine’s short story collection. Her stories are that heartbreaking, each one like a gift from a small child, offered with earnest, luminous eyes, innocence itself, impossible to reject…go find yourself a copy of this thrilling, touching, beautiful book.”

“In Kali Fajardo-Anstine’s debut story collection Sabrina & Corina we find a different narrative of the West. These are women who inhabit a space between the Indigenous and the Latinx, they are fierce [and] powerful in their own way.”

“Sabrina & Corina summons a world we hardly recognize, but should…Fajardo-Anstine can make a story smell of sickness. She can make legend of malediction. Conjuring the Sangre de Cristo Mountains, and unfurling the Denver skyline, there is no limit to what Fajardo-Anstine can manifest on paper and, subsequently, in our dreams. Yet, what is most admirable is the courage of her hand. She’s unafraid to delve into areas of race, feminism, queerness, and class. She interrogates whiteness, and its associations like passing and colorism, prodding unapologetically.” —Electric Literature

“[An] engrossing collection of tales…Stories that bravely reinvent the Wild West narrative by lifting up Latinx women and portraying callused hand cowboys not as heroes, but as villains and perpetrators of violence.” —Latino Book Review

“Fajardo-Anstine's prose blossoms on the page; her scenes and characters develop so vividly that they're likely to leave an impression lasting long after you stop reading.” —BuzzFeed News

“Eleven achingly realistic stories set in Denver and southern Colorado bear witness to the lives of Latina women of Indigenous descent trying to survive generations of poverty, racism, addiction, and violence… Fajardo-Anstine writes with a keen understanding of the power of love even when it's shot through with imperfections…Fajardo-Anstine takes aim at our country's social injustices and ills without succumbing to pessimism. The result is a nearly perfect collection of stories that is emotionally wrenching but never without glimmers of resistance and hope.” —Kirkus, «starred review«

“Latina and Indigenous American women who long to be seen—and see themselves—are the beating heart of the stories in Fajardo-Anstine's rich and radiant debut.…Sharing her characters' southern Colorado homelands, Fajardo-Anstine imbues her stories with a strong sense of place and the infinite unseen generations that coexist in even single moments.” —Booklist, «starred review«

"These stories blaze like wildfires. I was so happy to meet these characters. They made me laugh and they broke my heart. They were believable in everything they said and did. Women who were here before America was America. How tragic that American letters hasn’t met these women of the West before, and how tragic that these women haven’t seen themselves in the pages of American lit before. Thank you for honoring the lives of these working women, Kali. I welcome them and you."

“A powerful, passionate collection of stories centered on the experience of Latina women in the Southwest. Fajardo-Anstine’s voice is fresh and unstinting, her vision complex and bold. An important, delightful, dazzling debut.”

“Kali Fajardo-Anstine’s collection of stories, Sabrina & Corina, isn’t just good, it’s masterful storytelling. Fajardo-Anstine is a fearless writer: her women are strong and scarred witnesses of the violations of their homelands, their culture, their bodies; her plots turn and surprise, unerring and organic in their comprehensiveness; her characters break your heart, but you keep on going because you know you are in the hands of a master. (Is this really her first book?). Her stories move through the heart of darkness and illuminate it with the soul of truth. Comparisons came to mind: the Alice Munro of the high plains, the Toni Morrison of indigenous Latinas —but why compare her to anybody? She is her own unique voice, and her work will easily find a place, not just in Latinx literature, but in American literature and beyond. Can you see me? I’m giving this collection a standing ovation! Can you hear me? I’m calling out Brava! Brava! to Kali Fajardo-Anstine from a new fan and aficionada of her work.”

—Julia Alvarez, author of How the García Girls Lost Their Accents

“A terrific collection of stories—fiercely and beautifully made.”

"Sabrina and Corina is captivating, bold, and beautiful. There's a world here, and you’ll feel privileged to peer inside. This is a literary debut that kicks in the door. Kali Fajardo-Anstine is a badass.”

“Kali Fajardo-Anstine writes about hard truths in women’s lives so knowingly, and with such a deft touch, I felt hyper-alert, as well as implicated and imperiled. The book is about belief, coping, yearning, and proceeding in spite of adversity (that is, the times we stay alive). The final act of the first story tells us everything we need to know about what territory we’ll be entering: in these achingly convincing stories, the writer is writing delicately, symbolically, about mortality, itself.”

A haunting debut story collection on friendship, mothers and daughters, and the deep-rooted truths of our homelands, centered on Latinas of indigenous ancestry that shines a new light on the American West.

Kali Fajardo-Anstine’s magnetic story collection breathes life into her Latina characters of indigenous ancestry and the land they inhabit. Set against the remarkable backdrop of Denver, Colorado–a place that is as fierce as it is exquisite–these women navigate the land the way they navigate their lives: with caution, grace, and quiet force.

In “Sugar Babies,” ancestry and heritage are hidden inside the earth but tend to rise during land disputes. “Any Further West” follows a sex worker and her daughter as they leave their ancestral home in southern Colorado only to find a foreign and hostile land in California. In “Tomi,” a woman leaves prison and finds herself in a gentrified city that is a shadow of the one she remembers from her childhood. And in the title story, “Sabrina & Corina,” a Denver family falls into a cycle of violence against women, coming together only through ritual.

Sabrina & Corina is a moving narrative of unrelenting feminine power and an exploration of the universal experiences of abandonment, heritage, and an eternal sense of home.

Kali Fajardo-Anstine is from Denver, Colorado. She is the author of the debut short story collection Sabrina & Corina (One World/ Random House), a novel to follow. Her fiction has appeared in The American Scholar, Boston Review, Bellevue Literary Review, The Idaho Review, Southwestern American Literature, and elsewhere. Kali has been awarded fellowships from Yaddo, MacDowell Colony, and Hedgebrook. She has an MFA from the University of Wyoming. https://www.kalifajardoanstine.com/