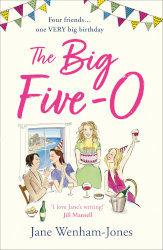 Charlotte, Sherie, Roz and Fay are all approaching their fiftieth birthdays.

And are planning a big joint party in their seaside town of Broadstairs.

On the surface they are all excited about the forthcoming celebrations, but each one of them has something darker going on they are keeping to themselves.

For one of them this is a diagnosis of breast cancer which is charted through first person diary entries.

The reader does not know which one of the women is going through this, until the end.

Charlotte runs a one-woman estate agency. She is missing her daughter, who has just started university, and has found evidence to suggest that her husband Roger is involved with another woman. She takes solace in her evening wine and enlists Fay to play detective.

Fay herself appears to be having a carefree relationship with a much younger man, claiming she doesn’t want commitment and never wanted children.

In reality, she has never got over the end of her marriage, hiding the truth about why she and her husband parted. She runs a removal firm and she and Charlotte often share clients.

Sherie is glamorous and attractive but has never had a long-term partner or children, and feels resentful that she has missed out on what the others seem to take for granted. She is the one struggling most with her impending big birthday.

The love of her life is her cat Marquis. Nate, a younger man who lives in the flat above her, takes care of him while she is travelling in her job as an art consultant, and they gradually grow closer.

Roz is the single mother of 15-year-old Amy. She has never told her daughter the truth about her absent father. She is desperately short of money and does some extra jobs for Charlotte, keeping her empty properties cleaned and aired.

She meets Jamie, a surveyor come to look at the property, when she mistakes him for a client.

He pursues her but she avoids him out of embarrassment and later some misunderstandings about his singledom.

As the party draws closer, all their lives begin to unravel…