CHINA IN ANOTHER TIME: A Personal Story
by Claire Malcolm Lintilhac 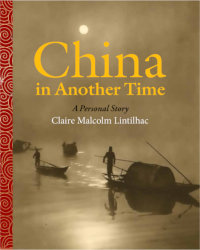 The daughter of a Canadian physician, Claire M. Lintilhac (1899-1984) grew up in rural China, and became a traveling nurse who lived and worked in the country throughout the first half of the 20th century, from the end of the last imperial dynasty to the first year of Communism.

China in Another Time is drawn from the writings and recorded storytelling Claire left behind, with brief historical sidebars and a scholarly introduction. Illustrated with more than 160 photographs and drawings, this book tells the compelling, personal story of a woman who lived between the worlds of West and East — and it opens a window onto China’s turbulent struggle to become its own modern nation.

“How do we gain some perspective on China after four decades of the fastest economic growth in world history? One way would be to enjoy this engaging account of one intrepid woman’s half-century of life there in the early 20th century. From childhood through becoming a nurse in a society where political turmoil and social insecurity created challenge and misfortune for so many, the author’s memories allow the reader to touch the texture of people’s daily lives. This is a moving introduction to the world the Chinese were fortunate enough to leave far behind.”

“This deeply human and moving book immerses us in a time that seems much more than just a generation away; in a culture and way of life that has disappeared forever; and in the dangerous and courageous lives of service that people not so very different from us were brave enough to pursue. How fortunate that Claire’s observations and photographs have survived to remind us of that recent yet irretrievable past.”

“This memoir of a Western woman who was born in China in the time of the Boxers and lived there throughout most of the next half-century, part of it as a traveling nurse, offers a fascinating window on a country undergoing a series of dramatic transformations. China in Another Time is enlivened by firsthand details, enriched by sidebar materials that help orient readers unfamiliar with the setting and the history, and filled with evocative visual materials.”

Jeffrey N. Wasserstrom, co-author of China in the 21st Century: What Everyone Needs to Know

“Lintilhac's fascinating, masterfully edited collection of vignettes, sidebars and archival photos is as intimate as a diary and as endearing as a scrapbook, allowing us to experience China through the lens of a privileged Western girl-becomes-nurse-midwife who was born in rural China as it convulsed in revolution to cast off foreign empire-builders. A wonderful, detailed addition to the genre of memoirs chronicling the birth of modern China.”

Helen Zia, author of Last Boat Out of Shanghai: The Epic Story of the Chinese Who Fled Mao's Revolution

“Born in 1899 to a Canadian medical missionary and his wife in a rural Chinese village, the author lived through the Boxer Rebellion, the first national government takeover and collapse, a decade-long period of warlord rule, a successful national government takeover in 1928, and finally, the Communist takeover in 1949. Throughout her narrative, she focuses on how such instability affected the Chinese people, as well as her own daily life as a 24-hour duty nurse.”

Claire Malcolm Lintilhac was born in China and lived there through most of the first half of the 20th century. Traveling the country as a freelance nurse, she witnessed what the Chinese endured as their nation struggled from the end of their last dynasty through decades of conflict to the advent of Communism.