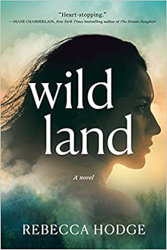 For fans of Jodi Picoult and Anita Shreve comes an exhilarating debut novel of one woman's courage in the face of catastrophe.

She'll do anything to save them.

But what will she do to save herself?

“Hodge captures the strength of the human spirit . . . An edge of your seat, emotional, powerful story filled with inspiration.” — Jennifer Ryan, The Me I Used to Be

“An adrenaline-pumping story about survival, acceptance, and courage, Wildland is a page-turner with a fearsome heroine.” — Barbara Claypole White, The Promise Between Us

“Hodge’s band of characters pop off the page—adults, children, and dogs alike . . . A heart-warming page-turner not to be missed!" — Kathryn Craft, The Far End of Happy

“Storytelling at its best . . . A detailed and gripping page-turner you won’t want to put down but will also want to slow down and savor.” —Barbara Davis, When Never Comes

“Gripping and filled with deep emotional truths, Wildland will lead you to the brink and back.” — Nancy Peacock, award-winning author of The Life and Times of Persimmon Wilson

When Kat Jamison retreats to the Blue Ridge Mountains, she's counting on peace and solitude to help her make a difficult decision. Her breast cancer has returned, but after the death of her husband, her will to fight is dampened. Now she has a choice to make: face yet another round of chemotherapy or surrender gracefully.

Self-reflection quickly proves impossible as her getaway is complicated by a pair of abandoned dogs and two friendly children staying nearby, Lily and Nirav. In no time at all, Kat's quiet seclusion is invaded by the happy confusion of children and pets.

But when lightning ignites a deadly wildfire, Kat's cabin is cut off from the rest of the camp, separating Lily and Nirav from their parents. Left with no choice, Kat, the children, and the dogs must flee on foot through the drought-stricken forest, away from the ravenous flames. As a frantic rescue mission is launched below the fire line, Kat drives the party deeper into the mountains, determined to save four innocent lives. But when the moment comes to save her own, Kat will have to decide just how hard she's willing to fight to survive--and what's worth living for.

A heart-pounding novel of bravery, sacrifice, and self-discovery, WILDLAND will keep you on the edge of your seat to the very last page.

Rebecca Hodge is an author of fiction, a veterinarian, and a clinical research scientist who lives and writes in North Carolina; WILDLAND is her debut.