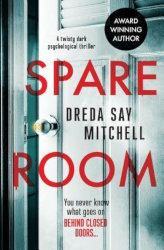 We are delighted to be able to share that film/TV rights have been optioned by Amazon Studios and they'll be making a feature film. They haven't made an announcement about the acquisition yet, but we'll send you more details as soon as we do.

Also happy to report that since January it has now sold 75,000 copies in English.

This is a wonderful psychological thriller, by an author who previously published her crime series with Hodder & Stoughton, which comes with glowing endorsements:

'Dreda Say Mitchell is an exciting new voice in urban fiction ... her prose has an individually slangily poetic zip' The Guardian

‘Fast-paced and full of twists and turns.’ Crime Scene Magazine

Dreda won the Crime Writer's Association John Creasy award for Best Debut Crime novel and she is working on her next standalone thriller.

Rights have been sold to date to:

Home Is Where The Nightmare Is

Lisa, a troubled young woman with a past, can’t believe her luck when she finds a beautiful room to rent in a large house. The live-in owners are a kind and welcoming couple. Everything is fine until she finds a suicide note hidden in her room. But when the couple insist this man didn’t exist and that Lisa is their first tenant, Lisa begins to doubt herself.

Compelled to undercover the secrets of the man who lived in the room before her, Lisa is alarmed when increasingly disturbing incidents start to happen. Someone doesn’t want Lisa to find out the truth.

As the four walls of this house and its secrets begin to close in on Lisa, she descends into a hellish hall of mirrors where she’s not sure what’s real and what’s not as she claws her way towards the truth…

Did this room already claim one victim?

Is it about to take another?

Dreda Say Mitchell, who grew up on a housing estate in east London, is an award-winning novelist, broadcaster, journalist and freelance education consultant who describes herself as a 'complete busybody'. Dreda was named one of Britain's 50 Remarkable Women by Lady Geek. She is the author of five novels, with her first book having been awarded The CWA's John Creasey Dagger for best debut crime novel - the first time a Black British writer has received this honour. She has appeared on Newsnight, Daybreak and Canadian television's Sun New Live. She has presented BBC Radio 4's Open Book, and is a frequent guest on Radio 4's The Review Show, Front Row and Saturday Review. Dreda has written for the Guardian, the Independent and the Observer on issues ranging from race and class to Phil Mitchell's drug addiction in EastEnders. www.dredasaymitchell.com