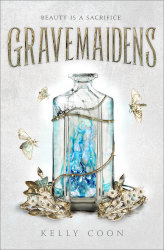 After her mother dies in childbirth and her father, a healer, retreats into himself, 16-year-old Kammani must take care of not just her brother and sister, but also her father’s patients throughout the city. But all of them are set aside when the city’s ruler falls ill. Kammani is desperate to save him. If she doesn’t, three innocent women will accompany him to the Netherworld as Sacred Virgins…and one of them is her sister. Kammani will stop at nothing to preserve what’s left of her family. Only her most important patient isn’t sick—he’s being poisoned. Caught up in palace intrigue and desperate to save a sister who blithely considers her impending death an honor, Kammani will need all her wits to catch the assassin…before she becomes the next victim.

About the author: Kelly Coon is an editor for Blue Ocean Brain, a recent addition to the Washington Post Talent Network, a former high school teacher, a test prep expert, escapee of Hurricane Irma, and mother to three boys. She lives near Tampa, FL with her husband, kids, and a rescue dog who will steal your sandwich. https://www.kellycoon.com/

Why I love GRAVEMAIDENS: This tense and fascinating novel about a girl trying to save her sister is rich with palace intrigue, a very real-feeling relationship between sisters who have different ideas about their value in society, and an excellent mystery that makes for a white-knuckle read. When main character Kammani is thrust into a position of responsibility—she must care for the ailing Lugal (king)—she quickly realizes the position is much more dangerous that it first appeared (and it already appeared pretty dangerous). If the Lugal dies, her sister, who has been chosen as a Gravemaiden, will accompany the Lugal to his tomb. But it becomes clear that someone WANTS the Lugal dead. Not only does Kammani have to heal the Lugal, but she must determine who she can trust, and who has it in for the Lugal…and who has it in for her. The fantasy element of this novel is light—it takes place in a made-up location that might be an ancient Mesopotamian city—but the idea of Gravemaidens is inspired by real findings in Sumerian graves; royals were sometimes buried with female attendants. Author Kelly Coon took this idea to tell a story of these girls chosen to die with their ruler, and she’s created a vibrant, zinging, and bold tale of brave women with limited means fighting back.

What’s next: A sequel is planned for release summer/fall 2020.

“A dark and utterly enthralling journey to an ancient land, Gravemaidens grabs you by your beating heart and refuses to let go until the bitter, breathtaking end.” – Sarah Glenn Marsh, author of the Reign of the Fallen series

“Coon builds a rich and detailed world complete with a history and rules that readers will enjoy uncovering slowly.” – Kirkus