PILLS, POWDER & SMOKE: INSIDE THE BLOODY WAR ON DRUGS
by Antony Loewenstein 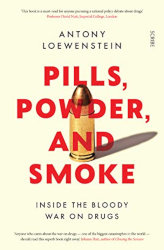 Antony’s book is hugely important and timely and has received strong endorsements and early film interest.

‘Antony Loewenstein is an amazing journalist and this is an outstanding book. Anyone who cares about the war on drugs – one of the biggest catastrophes in the world – should read this superb book right away.’-Johann Hari, author of Lost Connections and Chasing the Scream

'Many people assume that as the war on drugs has failed and because a few countries have liberated cannabis as a recreational drug as well as a medicine, the "drug problem" is solved. Loewenstein’s book powerfully demolishes any such complacency. Drug wars represent a major, ongoing world-wide disaster. This book is a must-read.' -Professor David Nutt, Imperial College, London

"Loewenstein's book is meticulous and forensic, and also impassioned and urgent. What stands out is the clarity of his thinking and the rigour of his arguments. He has an historian's grasp of the big picture and a storyteller's skill for getting us to walk in the other's shoes. The vast scope of his thinking, travel and research is evident on every page, as is his clear-headed compassion. This book is vital and I couldn't put it down."-Christos Tsiolkas author of The Slap and Barracuda

PILLS, POWDER & SMOKE at a glance:

• comprehensive, up to date investigation into the war on drugs and how US policies continue to perpetuate the violent war.

• on the ground, frontline research and interviews in the US, Britain, Australia, Honduras, Philippines and Guinea-Bissau. Exclusive interviews with the drug producers, officials pursuing the drug war, victims of the war and advocates of drug regulation/legalization.

• investigation into how Washington-led policies since the 1970s have increased drug use and trafficking around the world and how the war on drugs has never been about stopping drug use or dealing but about control over minorities and territory in the US and globally. This includes a comprehensive examination of Donald Trump’s administration and its draconian policies domestically and around the world. How is the growing marijuana legalization movement, in the US and in other nations, affecting the ability of Washington to pursue its drug war?

• how successive governments in various countries, including Honduras, Mexico and Colombia, have obeyed Washington and fought the drug war, resisted most reforms and insisted on prosecuting young drug takers while ignoring public opinion pushes for legalization.

• solid solutions on how to end the war on drugs through legalization and regulation of all drugs, the use of the dark net to purchase illicit substances and the growing movement to use psychedelic drugs such as LSD and ecstasy to treat mental health issues.