POSITIVE MAGIC: A Toolkit for the Modern Witch
by Marion Weinstein 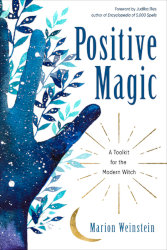 “A rare gem. One of the only magical self-help books that is beautiful, moral, and wise. Marion’s methods of working have greatly influenced my life.” - Margot Adler, Drawing Down the Moon

“This revised and expanded edition of this beloved classic can enrich the spiritual practice of longtime practitioners as well as those beginning their explorations of magical realms.” Selena Fox, High Priestess, Circle Sanctuary, Psychotherapist & Shamanic Healer

“Well written and fascinating, Positive Magic is a book you must read and keep by your side. Weinstein explains what you need to know and does it in a way that keeps you all the way through. An intelligent approach to using magic in your life.” Merlin Stone, author of When God Was a Woman and Ancient Mirrors of Womanhood

Here is a new edition of one of the best-loved introductions to magic that is still used in metaphysical classes around the world. The author makes ancient magic techniques accessible, offering them as practical tools for daily life. Addressing the needs of today’s readers—beginners and adepts alike—the author provides well-researched historical background on astrology, witchcraft, tarot, and the I Ching as well as channeling, spirit contact, and the connections between quantum physics and traditional magic.

Marion Weinstein (1939-2009) was an author, teacher, media personality, and proud New York City witch. Known as the “Ethics Witch” she is one of the founders of the modern witchcraft movement. She was the first to coin the phrase and define “positive magic” and clearly delineated its use. Her radio show, Marion’s Cauldron, was the first regularly scheduled Wiccan and psychic programming on record and was a New York phenomenon for 14 years. POSITIVE MAGIC, her first book, was published in 1978 and soon became a beloved classic. One student recalled Marion’s personal definition of magic as “transformational” and that her lifelong goal was to destigmatize witchcraft and show its positive influence on the world.