SERIAL KILLER TRIVIA: Fascinating Facts and Disturbing Details that WilL Freak You Out
by Michelle Kaminsky 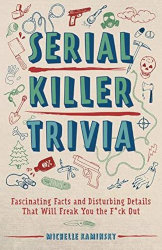 This bloody and completely true trivia collection will horrify and intrigue readers, with answers to questions like “What was John Wayne Gacy’s last meal?”, “Which serial killer was captured because of a bloody footprint left on his victim?", “Who was the FBI agent credited with coining the term 'serial killer'?” and “How was one mass murderer able to get away with selling his victim’s skeletons to medical students?”

Perfect for any murderino, true crime junkie or connoisseur of macabre tales, this fact-packed book quizzes readers on their true crime knowledge and offers fascinating stories of well-known murderers as well as lesser-known, but just as nefarious, killers. You’ll be surprised at how many fascinating tidbits you’ll learn about the world’s most cold-blooded and dangerous people.

Michelle Kaminsky is a freelance writer with a law degree and is a senior contributor at Forbes.